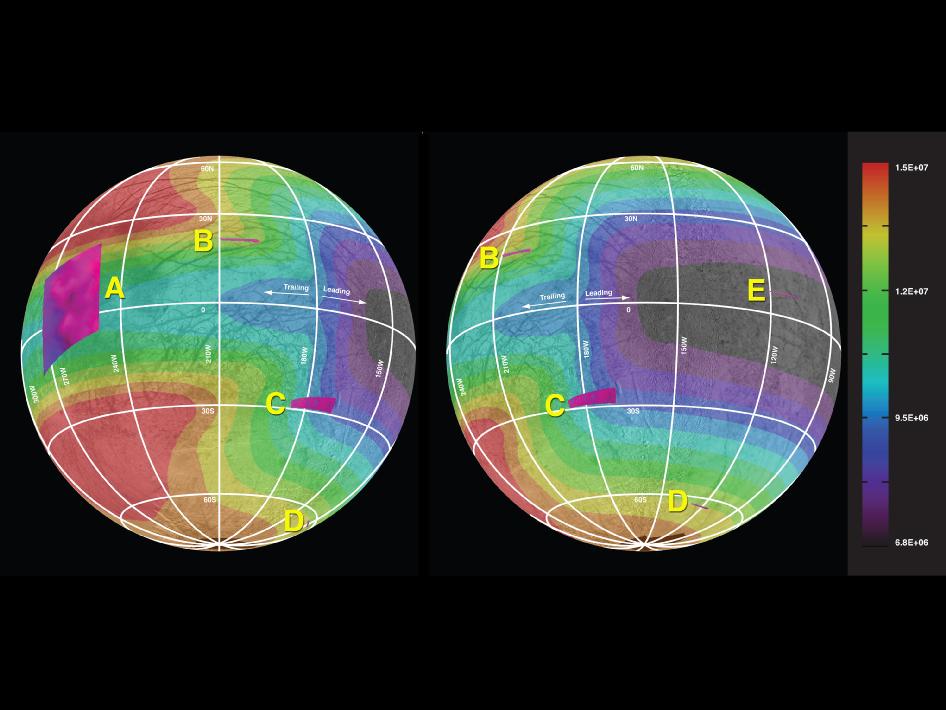 Energy From Above Affecting Surface of Europa

This graphic of Jupiter's moon Europa maps a relationship between the amount of energy deposited onto the moon from charged-particle bombardment and the chemical contents of ice deposits on the surface in five areas of the moon (labeled A through E).

Energetic ions and electrons tied to Jupiter's powerful magnetic field smack into Europa as the field sweeps around Jupiter. The magnetic field travels around Jupiter even faster than Europa orbits the planet. Most of the energetic particles hitting Europa strike the moon's "trailing hemisphere," the half facing away from the direction Europa travels in its orbit. The "leading hemisphere," facing in the direction of travel, receives fewer of the charged particles.

Researchers assessed the amount of sulfate hydrates -- compared with relatively pristine water -- in the surface ice in five widely distributed areas of Europa. They used data from observations made by the near infrared spectrometer (NIMS) instrument on NASA's Galileo spacecraft, which orbited Jupiter from 1995 to 2003. They found that the concentration of frozen sulfuric acid on the surface varies greatly. It ranges from undetectable levels near the center of Europa's leading hemisphere, to more than half of the surface material near the center of the trailing hemisphere. The concentration is closely related to the amount of energy received from electrons and sulfur ions striking the surface, with a distribution controlled by interactions between Jupiter and Europa's magnetic fields.

This pattern could provide direction for the best places to study the surface of Europa for learning about material churned up from the moon's subsurface, which includes a deep saltwater ocean beneath an icy shell. The portions of the surface least affected by the bombardment of charged particles from above are most likely to preserve the original chemical compounds that erupted from the interior. Understanding the chemical ingredients of Europa's subsurface ocean could help scientists determine whether, as many suspect, the ocean could have supported life in the past or even now.

The images of Europa used for the base maps of this figure were taken by the solid state imager on Galileo. The areas labeled A through E are the areas covered by five sets of NIMS observations, and color-coded with darker, bluer portions having more sulfate hydrates and brighter, pinker portions having more water ice. The mapped patterns for energy input are derived from models for the flux of electrons and ions delivered by Jupiter's magnetic field. The color-code key at the right is labeled in units of mega electron volts per square centimeter per second.

Credit: NASA/JPL-Caltech/Univ. of Ariz./JHUAPL/Univ. of Colo.