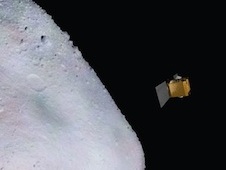 This is an artist's concept of the OSIRIS-REx spacecraft near asteroid 1999 RQ36. Credit: NASA Goddard Space Flight Center
› Full-resolution copy
Every year, sensors designed to detect nuclear explosions see harmless bursts in Earth’s upper atmosphere from the breakup of an asteroid a few yards across. Tiny asteroids are much more numerous than big ones, so destructive hits to Earth are very rare. However, because of their potential for devastation, NASA's Near-Earth Object (NEO) observations program supports surveys which are undertaking sustained searches to find the largest objects and predict their impact threat to Earth.

According to NASA's NEO program, there are more than 1,300 "Potentially Hazardous Asteroids" (PHAs) – objects at least 150 yards (about 140 meters) across with a very small chance of impacting us someday because their orbital paths take them close to Earth's orbit.

"Asteroids move at an average of 12 to 15 kilometers per second (about 27,000 to 33,000 miles per hour) relative to Earth, so fast that they carry enormous energy by virtue of their velocity," says Edward Beshore of the University of Arizona, Tucson, deputy principal investigator for NASA's OSIRIS-REx asteroid sample return mission. "Anything over a few hundred yards across that appears to be on a collision course with Earth is very worrisome."

The main difficulty is obtaining sufficient observations to be able to predict their orbits with enough certainty to find out if they could hit us at some point.

"When an asteroid makes a close pass to Earth, the gravitational pull from our planet changes the asteroid's orbit," says Beshore. "However, how this change will affect the evolution of the asteroid's orbit is difficult for us to predict because there are also other small forces continuously acting on the asteroid to change its orbit. The most significant of these smaller forces is the Yarkovsky effect – a minute push on an asteroid that happens when it is warmed up by the sun and then later re-radiates this heat in a different direction as infrared radiation."

The Yarkovsky effect happens simply because it takes time for things to heat up and cool down. Objects tend to be coldest just before dawn and warmest at mid-afternoon, after hours of illumination by the high sun. "A brick building can feel warm even in the early evening hours, because it is radiating away the heat accumulated from an entire day of sunshine," says Beshore. In the same way, an asteroid radiates most of its heat from its late "afternoon side", giving it the small Yarkovsky push which is variable depending mostly on the asteroid's size, shape and composition.

NASA's OSIRIS-REx mission (Origins, Spectral Interpretation, Resource Identification, Security, and Regolith Explorer) will make the most precise measurements of the Yarkovsky effect to date by visiting a PHA called "1999 RQ36" or just "RQ36."


"For such a large object, it has one of the highest known probabilities of impacting Earth, a 1 in 2,400 chance late in the 22nd century, according to calculations by Steve Chesley, an astronomer at NASA's Jet Propulsion Laboratory," said Beshore. RQ36 is about 457 meters (500 yards) across.

The best measurements of the Yarkovsky effect are made when an asteroid's position is precisely known. "If an asteroid comes very close, we can get radar observations on it," says Beshore. "With radar measurements, we get very good data on its range and therefore can constrain one aspect of its orbit very well. If we can get that measurement a couple of times (or more) over a few years, it helps us understand its orbital behavior and we can start to make an estimate of the Yarkovsky effect. We estimate the position of the asteroid and what its orbit must be like by using Newtonian and Relativistic physics. If we see a deviation from the estimated position, then it must be due to the sum of all these other small forces, and the greatest of these we believe to be the Yarkovsky effect."

Measurements like these enabled the team to estimate the very small force of the Yarkovsky effect on RQ36 – about equal to the weight felt when holding three grapes, according to Beshore. "Although very small, this force is constant and adds up over time to significantly change the asteroid's orbit," adds Beshore.

Scheduled for launch in 2016, OSIRIS-REx will arrive at RQ36 in 2018 and orbit the asteroid until 2021. By communicating continuously with a spacecraft in orbit around RQ36, the team will get a much better idea of the asteroid's orbit.

"We expect OSIRIS-REx will enable us to make an estimate of the Yarkovsky force on RQ36 at least twice as precise as what's available now," says Jason Dworkin, OSIRIS-REx project scientist at NASA's Goddard Space Flight Center in Greenbelt, Md. 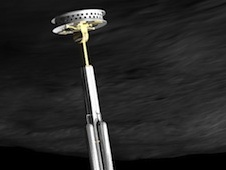 This is an artist's concept of the OSIRIS-REx sample collector, or "tag head," being deployed to collect a sample of asteroid 1999 RQ36. Credit: NASA Goddard Space Flight Center
› Full-resolution copy
The team will use what it learns about the Yarkovsky effect on RQ36 to help estimate the effects on other asteroids. "What we want to be able to do is create a model that says okay if you give me an asteroid of this size, made of this composition, with this kind of topography, I can estimate for you what the Yarkovsky effect will be," says Beshore. "So now I can probably come up with a better notion of what to expect from other asteroids that I don't have the good fortune to have a spacecraft around."

Given that OSIRIS-REx lets us better model the Yarkovsky effect, and we discover an asteroid that might hit us someday, what if anything can be done about it?

"There are several mitigation strategies," says Beshore. "We could explode a small nuclear device close above the surface on one side of the asteroid. This could be very effective – it would vaporize the surface layer, which would then fly off at very high speed, causing a rocket thrust that would shove everything over by a few centimeters per second. This might be plenty to deflect the asteroid. Other strategies include kinetic impactors, where you strike an asteroid very hard with a heavy projectile moving at high speed. In 2005, NASA's Deep Impact mission hit comet Tempel 1 with a 370-kilogram (over 815-pound) copper slug at about five kilometers per second (over 11,000 miles per hour), not nearly enough to significantly alter the orbit of the five-kilometer-sized body, but a proof of the technology for this kind of mission. Another idea is to use a gravity tractor – station a spacecraft precisely enough near the asteroid which would gradually deflect it with only its gravitational pull."

The key to all these strategies is to discover the asteroid well in advance of its impact date and attempt to deflect it early, according to Beshore. "If you're trying to deflect an arrow, you wouldn't need to apply much force to the arrow to make it widely miss the target if you could deflect it as it left the bow," says Beshore. "On the other hand, if you had to deflect it right before it hit the target, you’d need to push on it a whole lot more to get it out of the way."

One of the first things that would be done if an asteroid appeared to be on a collision course with Earth is to send a probe to the asteroid that might look very much like OSIRIS-REx, according to Beshore. "You want to characterize it first to choose the correct deflection strategy," says Beshore. "For example, we know the density of RQ36 is about 1 gram per cubic centimeter, over two times less than solid rock. This means it is probably a rubble pile – a collection of boulders, rocks, and dust loosely held together by gravity. Some deflection strategies might be ineffective with this kind of asteroid."

OSIRIS-REx will determine if RQ36 is actually a rubble pile by orbiting it and revealing the subtle effects on the orbit from the gravity of any large and dense lumps within the asteroid. A probe like OSIRIS-REx could map the internal structure of an asteroid this way, providing valuable information on where to target the deflection mechanism. 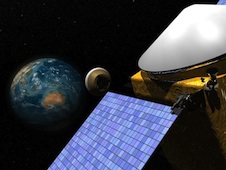 This is an artist's concept of the OSIRIS-REx Sample Return Capsule being released for its return to Earth. Credit: NASA Goddard Space Flight Center
› Full-resolution copy
OSIRIS-REx will also determine the composition of RQ36 using remote measurements from both visible light and infrared spectrometers, and by collecting a sample of material from the asteroid's surface and returning it to Earth for study. Since the Yarkovsky effect may vary depending on the type of material and its distribution, a probe with OSIRIS-REx's capability to map the surface composition will enable a more precise estimate of the Yarkovsky effect on the asteroid's orbit.

The mission will also provide critical experience navigating around asteroids. "We don't have a lot of experience doing precise maneuvers near one of these objects with very small gravity," says Beshore. "It's not easy to stay in orbit around it – this asteroid's gravitational pull is so weak, the push from sunlight on our spacecraft's solar panels will be roughly similar to the amount of force from the gravity of RQ36 itself. We have to factor in a lot of these forces to navigate and operate around an asteroid. With OSIRIS-REx, we'll generate a set of techniques and technologies for any mission that would go to an asteroid to characterize it in advance of a mitigation mission."