Grow Text SizeShrink Text Size
NASA Chooses Three Finalists for Future Space Science Mission to Venus, an Asteroid or the Moon
NASA has selected three proposals as candidates for the agency's next space venture to another celestial body in our solar system. The final project selected in mid-2011 may provide a better understanding of Earth's formation or perhaps the origin of life on our planet. 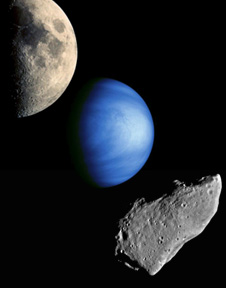 From top to bottom, pictured (not to scale) are the moon, Venus, and an asteroid. These three celestial bodies from our solar system are possible candidates for NASA's next space venture. The proposed missions would probe the atmosphere and crust of Venus; return a piece of a near-Earth asteroid for analysis; or drop a robotic lander into a basin at the moon's south pole to return lunar rocks back to Earth for study.

NASA will select one proposal for full development after detailed mission concept studies are completed and reviewed. The studies begin during 2010, and the selected mission must be ready for launch no later than Dec. 30, 2018. Mission cost, excluding the launch vehicle, is limited to $650 million.

"These are projects that inspire and excite young scientists, engineers and the public," said Ed Weiler, associate administrator for the Science Mission Directorate at NASA Headquarters in Washington. "These three proposals provide the best science value among eight submitted to NASA this year."

Each proposal team initially will receive approximately $3.3 million in 2010 to conduct a 12-month mission concept study that focuses on implementation feasibility, cost, management and technical plans. Studies also will include plans for educational outreach and small business opportunities.

The selected proposals are:

The proposals were submitted to NASA on July 31, 2009, in response to the New Frontiers Program 2009 Announcement of Opportunity. New Frontiers seeks to explore the solar system with frequent, medium-class spacecraft missions that will conduct high-quality, focused scientific investigations designed to enhance understanding of the solar system.

The final selection will become the third mission in the program. New Horizons, NASA’s first New Frontiers mission, launched in 2006, will fly by the Pluto-Charon system in 2015 then target another Kuiper Belt object for study. The second mission, called Juno, is designed to orbit Jupiter from pole to pole for the first time, conducting an in-depth study of the giant planet's atmosphere and interior. It is slated for launch in August 2011.