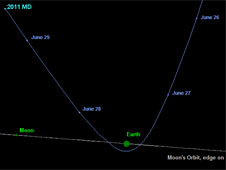 Trajectory of 2011 MD from the general direction of the Sun. Image credit: NASA/JPL/
› Larger view

Near-Earth asteroid 2011 MD will pass only 12,000 kilometers (7,500 miles) above the Earth's surface on Monday June 27 at about 9:30 EDT. The asteroid was discovered by the LINEAR near-Earth object discovery team observing from Socorro, New Mexico. This small asteroid, only 5-20 meters in diameter, is in a very Earth-like orbit about the Sun, but an orbital analysis indicates there is no chance it will actually strike Earth on Monday. If a rocky asteroid the size of 2011 MD were to enter Earth's atmosphere, it would be expected to burn up high in the atmosphere and cause no damage to Earth's surface. The accompanying diagram gives a view of the asteroid's trajectory from the general direction of the Sun. This view indicates that 2011 MD will reach its closest Earth approach point in extreme southern latitudes (in fact over the southern Atlantic Ocean). The incoming trajectory leg passes several thousand kilometers outside the geosynchronous ring of satellites and the outgoing leg passes well inside the ring. One would expect an object of this size to come this close to Earth about every 6 years on average. For a brief time, it may be bright enough to be seen even with a modest-sized telescope.

For more information on 2011 MD and other near-Earth objects, visit http://neo.jpl.nasa.gov.