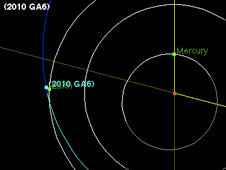 With additional observations coming in, scientists at NASA's Near-Earth Object Office at the Jet Propulsion Laboratory in Pasadena, Calif. have been able to further refine the trajectory estimate for the orbit of asteroid 2010 GA6. This latest trajectory indicates that the closest approach for asteroid 2010 GA6 will be just slightly beyond the moon's orbit, about 434,000 kilometers (270,000 miles) from Earth. The time of closest approach will be 7:06 p.m. Pacific Daylight Time on April 8 (2:06 U.T.C. on April 9).

NASA detects and tracks asteroids and comets passing close to Earth using both ground and space-based telescopes. The Near-Earth Object Observations Program, commonly called "Spaceguard," discovers these objects, characterizes a subset of them and plots their orbits to determine if any could be potentially hazardous to our planet.

JPL manages the Near-Earth Object Program Office for NASA's Science Mission Directorate in Washington. JPL is a division of the California Institute of Technology in Pasadena. Cornell University, Ithaca, N.Y., operates the Arecibo Observatory under a cooperative agreement with the National Science Foundation in Arlington, Va.

For more information about asteroids and near-Earth objects, visit: