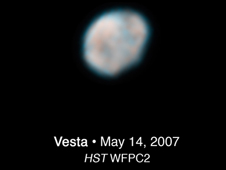 The most prominent asteroid in the sky is currently yours for the perusing with binoculars -- and perhaps even the naked eye.

Tomorrow night, Wednesday, Feb. 17, Vesta, the second most massive object in the asteroid belt, reaches what astronomers like to call "opposition." An asteroid (or planet or comet) is said to be "in opposition" when it is opposite to the sun as seen from Earth. In other words, if you were to stand outside with the sun directly above you at high noon, Vesta would be directly below your feet some 211,980,000 kilometers (131,700,000 miles) away. With Vesta at opposition, the asteroid is at its closest point to Earth in its orbit.

Wednesday night, the asteroid is expected to shine at magnitude 6.1. That brightness should make it visible to interested parties brandishing telescopes or binoculars, and even those blessed with excellent vision and little or no light pollution or clouds in their vicinity. Vesta will be visible in the eastern sky in the constellation Leo.

What makes this space rock so prominent these days? Along with its relative proximity at this point, a full half of the asteroid is being bathed by sunlight when seen from Earth, making it appear brighter. Another attribute working in the observer's favor is that Vesta has a unique surface material that is not as dark as most main belt asteroids - allowing more of the sun's rays to reflect off its surface.

If spotting Vesta in the night sky has whetted your appetite for mega-rocks, all we can say is, stay tuned. NASA's Dawn spacecraft, currently motoring its way through the asteroid belt, will begin its exploration of Vesta in the summer of 2011.