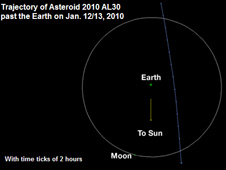 This orbital diagram depicts the trajectory of asteroid 2010 AL30 during its flyby of Earth in the early morning hours of Jan. 13. Image credit: NASA/JPL
› Full image


Asteroid 2010 AL30, discovered by the LINEAR survey of MIT's Lincoln Laboratories on Jan. 10, will make a close approach to the Earth's surface to within 76,000 miles on Jan. 13 at 12:46 pm Greenwich time (7:46 am EST, 4:46 am PST). Because its orbital period is nearly identical to the Earth's one year period, some have suggested it may be a manmade rocket stage in orbit about the sun. However, this object's orbit reaches the orbit of Venus at its closest point to the sun and nearly out to the orbit of Mars at its furthest point, crossing the Earth's orbit at a very steep angle. This makes it very unlikely that 2010 AL30 is a rocket stage. Furthermore, trajectory extrapolations show that this object cannot be associated with any recent launch and it has not made any close approaches to the Earth since well before the Space Age began.

It seems more likely that this is a near-Earth asteroid about 10-15 meters in size, one of approximately 2 million such objects in near-Earth space. One would expect a near-Earth asteroid of this size to pass within the moon's distance about once every week on average. The asteroid does not pose a risk, in fact, stony asteroids under 25 meters in diameter would be expected to burn up in our atmosphere, causing little or no ground damage.