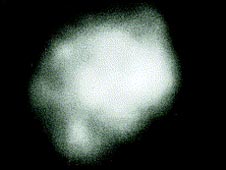 The asteroid Juno was photographed in 2003 with a special optics system on the Hooker telescope at the Mount Wilson Observatory. The researchers at the Harvard-Smithsonian Center for Astrophysics who took the picture used varying wavelengths of light as measured in nanometers, starting with cyan and going into the infrared. Image Credit: Harvard-Smithsonian Center for Astrophysics
› Larger view 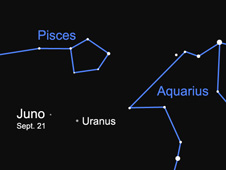 On or before Sept. 21, 2009, look for Juno after midnight a few degrees east of the brighter glow of Uranus and in the constellation Pisces. Image Credit: NASA/JPL
› Larger view Toward the end of September, the sun will turn a spotlight on the asteroid Juno, giving that bulky lump of rock a rare featured cameo in the night sky. Those who get out to a dark, unpolluted sky will be able to spot the asteroid's silvery glint near the planet Uranus with a pair of binoculars.

"It can usually be seen by a good amateur telescope, but the guy on the street doesn't usually get a chance to observe it," said Don Yeomans, manager of NASA's Near Earth Object Program Office at JPL. "This is going to be as bright as it gets until 2018."

Juno, one of the first asteroids discovered, is thought to be the parent of many of the meteorites that rain on Earth. The asteroid is composed mostly of hardy silicate rock, which is tough enough that fragments broken off by collisions can often survive a trip through Earth's atmosphere.

Though pockmarked by bang-ups with other asteroids, Juno is large; in fact, it is the tenth largest asteroid. It measures about 234 kilometers (145 miles) in diameter, or about one-fifteenth the diameter of the moon.

The asteroid, which orbits the sun on a track between Mars and Jupiter, will be at its brightest on Sept. 21, when it is zooming around the sun at about 22 kilometers per second (49,000 miles per hour). At that time, its apparent magnitude will be 7.6, which is about two-and- a-half times brighter than normal. The extra brightness will come from its position in a direct line with the sun and its proximity to Earth. (The asteroid will still be about 180 million kilometers [112 million miles] away, so there is no danger it will fall towards Earth.)

Skywatchers with telescopes can probably see Juno from now until the end of the year, but it is most visible to binoculars in late September. On or before Sept. 21, look for Juno near midnight a few degrees east of the brighter glow of Uranus and in the constellation Pisces. It will look like a gray dot in the sky, and each night at the end of September, it will appear slightly more southwest of its location the night before. By Sept. 25, it will be closer to the constellation Aquarius and best seen before midnight.

For more information: http://neo.jpl.nasa.gov/ .
› Back To Top