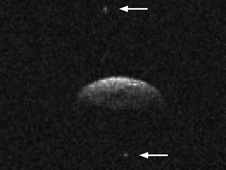 1994 CC consists of a central object about 700 meters (2,300 feet) in diameter that has two smaller moons revolving around it. Preliminary analysis suggests that the two small satellites are at least 50 meters (164 feet) in diameter. Radar observations at Arecibo Observatory in Puerto Rico, led by the center's director Mike Nolan, also detected all three objects, and the combined observations from Goldstone and Arecibo will be utilized by JPL scientists and their colleagues to study 1994 CC's orbital and physical properties.

The next comparable Earth flyby for asteroid 1994 CC will occur in the year 2074 when the space rock trio flies past Earth at a distance of two-and-a-half million kilometers (1.6 million miles).

Of the hundreds of near-Earth asteroids observed by radar, only about 1 percent are triple systems.
› Back To Top