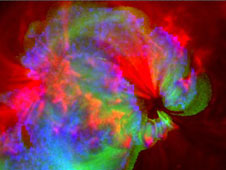 Nanoflares are small, sudden bursts of heat and energy. "They occur within tiny strands that are bundled together to form a magnetic tube called a coronal loop," says Klimchuk. Coronal loops are the fundamental building blocks of the thin, translucent gas known as the sun's corona. 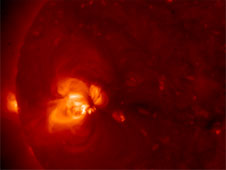 > View larger image
Two active regions appear as bright areas on this full-disk image of the sun, taken with the Hinode spacecraft's X-Ray Telescope. Credit: NASA Observations from the NASA-funded X-Ray Telescope (XRT) and Extreme-ultraviolet Imaging Spectrometer (EIS) instruments aboard Hinode reveal that ultra-hot plasma is widespread in solar active regions. The XRT measured plasma at 10 million degrees K, and the EIS measured plasma at 5 million degrees K. "These temperatures can only be produced by impulsive energy bursts,"says Klimchuk, who presented the findings on August 6 at the International Astronomical Union General Assembly meeting in Rio de Janeiro, Brazil.

"Coronal loops are bundles of unresolved strands that are heated by storms of nanoflares."

Klimchuk and colleagues constructed a theoretical model to explain how plasma evolves within these coronal tubes and what causes temperatures to skyrocket. "We simulate a burst of heating and see how the corona responds," says Klimchuk. "Then we make predictions about how much emission we should see from plasma of different temperatures."

Klimchuk surmises that when a nanoflare suddenly releases its energy, the plasma in the low-temperature, low-density strands becomes very hot—around 10 million degrees K—very quickly. The density remains low, however, so the emission, or brightness, remains faint. Heat flows from up in the strand, where it's hot, down to the base of the coronal loop, where it's not as hot. This heats up the dense plasma at the loop’s base. Because it is so dense at the base, the temperature only reaches about 1 million degrees K. This dense plasma expands up into the strand. Thus, a coronal loop is a collection of 5-10 million degree K faint strands and 1 million degree K bright strands.

"What we see is 1 million degree K plasma that has received its energy from the heat flowing down from the superhot plasma," says Klimchuk. "For the first time, we have detected this 10 million degree plasma, which can only be produced by the impulsive energy bursts of nanoflares."

The Hinode observations and the scientists' analysis verify that nanoflares are occurring on the sun and that they explain much and perhaps most coronal heating. The observations also confirm "there is some nanoflare activity everywhere" in the sun's active regions, says Klimchuk.

Nanoflares are responsible for changes in the X-ray and ultraviolet (UV) radiation that happen as an active region evolves. X-ray and UV get absorbed by Earth's upper atmosphere, which heats up and expands. Changes in the upper atmosphere can affect the orbits of satellites and space debris by slowing them down, an effect known as "drag." It is important to know the changing orbits so that maneuvers can be made to avoid space collisions. The X-ray and UV also affect the propagation of radio signals and thereby adversely affect communication and navigation systems.

The discovery that nanoflares play an important and perhaps dominant role in coronal heating paves the way to understanding how the sun affects Earth, our place in the universe.