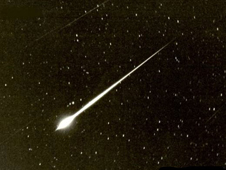 This photo illustration of a different fireball was taken in 1966 by astronomer Jim Young of JPL's Table Mountain Observatory. Image credit: TMO/JPL/NASA

PASADENA, Calif. – A meteor is the most probable cause of a bright, colorful fireball witnessed by people in a wide swath of the southwestern United States, according to Don Yeomans, manager of NASA's Near-Earth Object Program Office at JPL.

Residents from Southern California to Arizona to Las Vegas reported seeing a streak of light move rapidly from west to east around 7:45 p.m. PDT on Wednesday, Sept. 14.

"We're virtually certain this bright display was caused by a meteor, probably the size of a baseball or basketball, that burned up in Earth's atmosphere. It appeared much larger because of the heated and glowing atmosphere along its path," said Yeomans.

Many eyewitnesses described seeing brilliant colors of blue, green and orange. Yeomans said the blue or green colors indicate the meteor contained nickel or magnesium, while orange would mean the object was traveling relatively slowly for a meteor, but still moving a few miles per second.

A meteor is a small fragment of an asteroid. Yeomans said that similar fireballs from asteroids enter Earth's atmosphere every week or so, but they usually take place over the ocean or in a sparsely populated area.

This time, Yeomans says, "The fireball was very bright and provided a harmless but memorable light show for people in numerous cities and towns in the southwestern states."