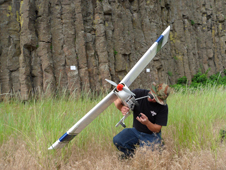 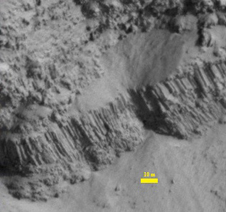 Basalt columns in a (top) fresh crater near Marte Vallis on Mars look remarkably similar to columns at the Clarkston outcrop (bottom) in Washington state. The Mars columns were imaged with the HiRISE camera on NASA's Mars Reconnaissance Orbiter. The aerial view of the Clarkston outcrop was taken from a remote-controlled plane. The scale (yellow bar) of both images is 10 meters (about 33 feet). Credit: NASA/JPL/University of Arizona and Goddard/David Weiss
Click either image for a larger version. 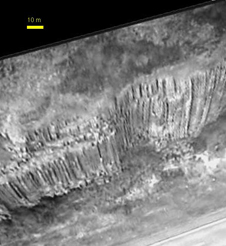 In a rough-and-tumble wonderland of plunging canyons and towering buttes, some of the still-raw bluffs are lined with soaring, six-sided stone columns so orderly and trim, they could almost pass as relics of a colossal temple. The secret of how these columns, packed in edge to edge, formed en masse from a sea of molten rock is encrypted in details as tiny as the cracks running across their faces. To add to this mystery's allure, decoding it might do more than reveal the life story of some local lava: it might help explain the history of Mars.

But with trips to Mars hard to come by, the interns of the 2011 Lunar and Planetary Sciences Academy (LPSA) at NASA's Goddard Space Flight Center in Greenbelt, Md., traveled to the Channeled Scablands of eastern Washington state. It's a region that has been helping scientists understand the forces that shape planetary surfaces for a century "The Legacy of Megafloods".

Here, the honeycomb-shaped columns bear a striking resemblance to those spotted in images of Marte Vallis and other regions of Mars. "Many of the landscape features in the Channeled Scablands are similar to ones seen on the surface of Mars, so we can study volcanic activity on Mars by looking in our own backyard," says Andrew Ryan, who was the student coordinator for the LPSA field trip and is now in graduate school at Arizona State University in Tempe.

A key step was to find out "what we could learn about the columns in the Channeled Scablands from the air," says Cynthia Cheung, principal investigator for Goddard's Lunar and Planetary Sciences Academy. That's because the images of the Mars columns had been taken by the HiRISE (for High Resolution Imaging Science Experiment) camera on NASA's Mars Reconnaissance Orbiter.

The aerial measurements could then be compared to measurements taken on the ground. "This helps us understand what we can and can't learn from an orbiting spacecraft," Cheung adds.

All in the family

The likenesses begin with the long, relatively straight canyons known as outflow channels. These channels come complete with sandbar-like hills and prow-shaped islands, the "noses" of which point in the direction of the flow that carved them. Running through both terrains are snaking, branching channels carved by fluid, as well as channels that swell out at some points as if backed up by a bottleneck downstream. Selected rocks bear scour marks where liquid steered around an obstacle and became like white water, and certain cliff sides are lined with distinctive stone columns packed edge to edge. And so on.

"It was cool to see the similarities between Earth and the Red Planet," says Melissa Guzman, an LPSA intern who will begin her graduate studies in aerospace engineering at the University of Colorado, Boulder, in the fall of 2012. "And because of the hands-on nature of our field trip, I could imagine myself on Mars years from now, making similar measurements."

The interns' immediate focus, though, was on the orderly columns, especially what the ones in Washington State could tell them about Mars.

In the Channeled Scablands, the molten basalt that formed the columns seeped up through gashes in the ground and spread far and wide. More than a hundred of these lava flows smothered the land during a series of eruptions spanning some 10 million years, building up a rock layer that reached a thickness of two miles, the average depth of the Atlantic Ocean.

The columns took shape when the lava cooled and hardened. As the heat escaped, the basalt contracted from all sides, opening a network of cracks that divided the once-seamless surface into a forest of six-sided pillars. (Depending on the conditions when the lava cooled, the columns can have from four to seven sides.) These are called jointed basalt columns, and they can be found on every continent except Antarctica, with Giant's Causeway in Ireland and Devils Postpile in California as two of the most famous examples.

"We can see the columns at the edges of the lava flow easily, but we're confident that in some cases the entire lava flow is jointed," says Patrick Burkhart, a geologist from Slippery Rock University in Slippery Rock, Penn., and one of the researchers who accompanied the LPSA interns. Extensive jointing is likely the case in Marte Vallis, where basalt columns were exposed when the impact of a large object gouged out a crater, and in the Channeled Scablands, where they were revealed when flood waters swept away swaths of land.

It's possible to figure out how quickly the basalt cooled, and thus how quickly the columns formed, by measuring the distance from one small horizontal crack, called a stria, to the next.

"As the lava is cooling, the contraction creates stress," Ryan explains. "It pulls, pulls, pulls, and then the pressure gets too great, and click! You get a fracture plane. That's a stria. And it keeps going like this—pull, pull, pull, click!—until you get a series of faint lines up and down the column."

In this way, the heights of the striae say something about the cooling process, as do the widths of the columns. Scientists have developed models of how the stria height relates to the cooling rate of basalt on Earth.

"We wanted to take it a step further and use measurements on Earth to estimate the cooling rate of the columns on Mars," says LPSA intern David Weiss, an undergraduate at the College of Charleston in South Carolina.

But details such as striae are too small to be seen in the images of the Martian columns. That means the stria height must be deduced from a feature that can be resolved: the column width. To figure out how these two features are related, the LPSA interns measured both characteristics at three locations in the scablands. 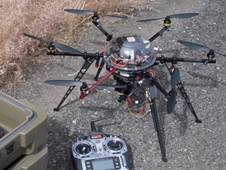 The hexacopter is prepared for takeoff. The students compared aerial views, taken by the hexacopter and the remote-controlled airplane, with the measurements taken on the ground. Below is the hexacopter in flight. Credit: NASA/Goddard/Cynthia Cheung
› Larger image 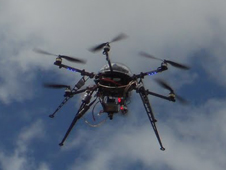 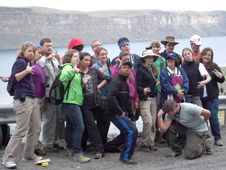 "The initial plan was to tilt the RC plane so that it was almost on its side and to fly it along the side of the cliff," explains Jackson. "But that didn't work as well as we expected. So instead, we flew the hexacopter up and down the cliff face. That gave us the kind of images we needed."

Later, Weiss estimated the widths of the basalt columns based on the aerial images. With that information in hand, he was ready to estimate the striae heights for the Mars columns and then plug that value into the equation for the cooling rate.

Because the LPSA team had taken measurements on the ground, Weiss was able to determine that there's an offset between those data and the aerial measurements. His estimate for the cooling rates of the Martian columns is therefore a range, rather than a single number, and he continues to work on ways to adjust the aerial measurements to improve their accuracy. In December 2011, he presented the results on behalf of the LPSA team in a poster at the American Geophysical Union meeting in San Francisco, Calif.

"We had to make some assumptions about the conditions on Mars," Weiss notes. "But if the cooling processes were similar on Mars and Earth, and if water was involved in the cooling, then the cooling time in Marte Vallis was between 2 and 8 years, compared to 2 years for the Channeled Scablands."

Weiss is careful to say "if water was involved" because exactly how the cooling works is still being discussed. Some researchers, including those who spotted the Marte Vallis columns, think that water could help cool the hot lava uniformly and produce the well-ordered contraction that is needed to form the basalt columns. Other researchers say the cooling can be uniform without the aid of water.

By fleshing out the details of how basalt columns formed in the scablands, then, scientists should get some valuable information about the history of water on the surface of Mars. As the discussions continue, so does the legacy of the Channeled Scablands.