Grow Text SizeShrink Text Size
Meteorites Reveal Another Way to Make Life's Components
Creating some of life's building blocks in space may be a bit like making a sandwich – you can make them cold or hot, according to new NASA research. This evidence that there is more than one way to make crucial components of life increases the likelihood that life emerged elsewhere in the Universe, according to the research team, and gives support to the theory that a "kit" of ready-made parts created in space and delivered to Earth by impacts from meteorites and comets assisted the origin of life. 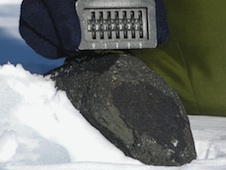 A meteorite analyzed in the study at its collection site in Antarctica. Credit: Antarctic Search for Meteorites program, Case Western Reserve University
Full-resolution copy
In the study, scientists with the Astrobiology Analytical Laboratory at NASA's Goddard Space Flight Center in Greenbelt, Md., analyzed samples from fourteen carbon-rich meteorites with minerals that indicated they had experienced high temperatures – in some cases, over 2,000 degrees Fahrenheit. They found amino acids, which are the building blocks of proteins, used by life to speed up chemical reactions and build structures like hair, skin, and nails.

Previously, the Goddard team and other researchers have found amino acids in carbon-rich meteorites with mineralogy that revealed the amino acids were created by a relatively low-temperature process involving water, aldehyde and ketone compounds, ammonia, and cyanide called "Strecker-cyanohydrin synthesis."

"Although we've found amino acids in carbon-rich meteorites before, we weren't expecting to find them in these specific groups, since the high temperatures they experienced tend to destroy amino acids," said Dr. Aaron Burton, a researcher in NASA's Postdoctoral Program stationed at NASA Goddard. "However, the kind of amino acids we discovered in these meteorites indicates that they were produced by a different, high-temperature process as their parent asteroids gradually cooled down." Burton is lead author of a paper on this discovery appearing March 9 in Meteoritics and Planetary Science.

In the new research, the team hypothesizes the amino acids were made by a high-temperature process involving gas containing hydrogen, carbon monoxide, and nitrogen called "Fischer-Tropsch" –type reactions. They occur at temperatures ranging from about 200 to 1,000 degrees Fahrenheit with minerals that facilitate the reaction. These reactions are used to make synthetic lubricating oil and other hydrocarbons; and during World War II, they were used to make gasoline from coal in an attempt to overcome a severe fuel shortage.

Researchers believe the parent asteroids of these meteorites were heated to high temperatures by collisions or the decay of radioactive elements. As the asteroid cooled, Fischer-Tropsch-type (FTT) reactions could have happened on mineral surfaces utilizing gas trapped inside small pores in the asteroid.

FTT reactions may even have created amino acids on dust grains in the solar nebula, the cloud of gas and dust that collapsed under its gravity to form the solar system. "Water, which is two hydrogen atoms bound to an oxygen atom, in liquid form is considered a critical ingredient for life. However, with FTT reactions, all that's needed is hydrogen, carbon monoxide, and nitrogen as gases, which are all very common in space. With FTT reactions, you can begin making some prebiotic components of life very early, before you have asteroids or planets with liquid water," said Burton.

In the laboratory, FTT reactions produce amino acids, and can show a preference for making straight-chain molecules. "In almost all of the 14 meteorites we analyzed, we found that most of the amino acids had these straight chains, suggesting FTT reactions could have made them," said Burton.

The experiments showing FTT reactions produce amino acids were performed over 40 years ago. The products have not been analyzed with modern techniques, so the exact distributions of amino acid products have not been determined. The team wants to test FTT reactions in the laboratory using a variety of ingredients and conditions to see if any produce the types of amino acids with the abundances they found in the 14 meteorites.

The research was funded by the NASA Astrobiology Institute (NAI), the Goddard Center for Astrobiology, and the NASA Cosmochemistry Program. NAI is managed by NASA Ames Research Center in Mountain View, Calif. Dr. Burton was supported by the NASA Postdoctoral Program, administered by Oak Ridge Associated Universities through a contract with NASA. Meteorite samples were provided by Dr. Kevin Righter of NASA's Johnson Space Center, Houston, Texas.