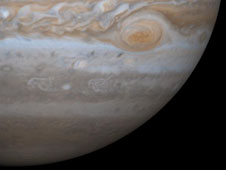 Jupiter's Great Red Spot.
Image Credit: NASA. Been outside at midnight lately? There's something you really need to see. Jupiter is approaching Earth for the closest encounter between the two planets in more than a decade--and it is dazzling.

The night of closest approach is Sept. 20-21st. This is also called "the night of opposition" because Jupiter will be opposite the sun, rising at sunset and soaring overhead at midnight. Among all denizens of the midnight sky, only the moon itself will be brighter.

Earth-Jupiter encounters happen every 13 months when the Earth laps Jupiter in their race around the sun. But because Earth and Jupiter do not orbit the sun in perfect circles, they are not always the same distance apart when Earth passes by. On Sept. 20th, Jupiter will be as much as 75 million km closer than previous encounters and will not be this close again until 2022.

The view through a telescope is excellent. Because Jupiter is so close, the planet's disk can be seen in rare detail--and there is a lot to see. For instance, the Great Red Spot, a cyclone twice as wide as Earth, is bumping up against another storm called "Red Spot Jr." The apparition of two planet-sized tempests grinding against one another must be seen to be believed.

Also, Jupiter's trademark South Equatorial Belt (SEB) recently vanished, possibly submerging itself beneath high clouds. Researchers say it could reappear at any moment. The dramatic resurgence would be accompanied by a globe-straddling profusion of spots and cloudy swirls, clearly visible in backyard telescopes.

And what was that flash? Amateur astronomers have recently reported a surprising number of fireballs in Jupiter's atmosphere. Apparently, many small asteroids or comet fragments are hitting the giant planet and exploding among the clouds. Researchers who have studied these events say visible flashes could be occurring as often as a few times a month.

Finally, we mustn't forget the moons of Jupiter because they are also having a close encounter with Earth. These are planet-sized worlds with active volcanoes (Io), possible underground oceans (Europa), vast fields of craters (Callisto), and mysterious global grooves (Ganymede). When Galileo discovered the moons 400 years ago, they were no more than pinpricks of light in his primitive spy glass. Big, modern amateur telescopes reveal actual planetary disks with colorful markings.

It makes you wonder, what would Galileo think?

Answer: "I'm getting up at midnight!"