Grow Text SizeShrink Text Size
Turmoil From Below, Battering From Above 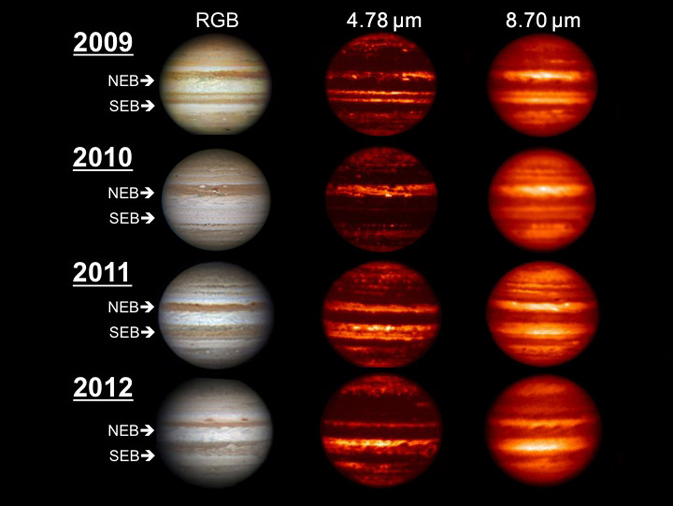 Images in the visible-light and infrared parts of the spectrum highlight the massive changes roiling the atmosphere of Jupiter. Image credit: NASA/IRTF/JPL-Caltech/NAOJ/A. Wesley/A. Kazemoto/C. Go › Full image and caption 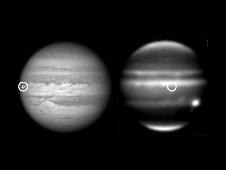 Jupiter has been suffering more impacts over the last four years than ever previously observed, including this meteoroid impact on Sept. 10, 2012. Image credit: NASA/IRTF/JPL-Caltech/G. Hall/University of the Basque Country
› Full image and caption

Jupiter, the mythical god of sky and thunder, would certainly be pleased at all the changes afoot at his namesake planet. As the planet gets peppered continually with small space rocks, wide belts of the atmosphere are changing color, hotspots are vanishing and reappearing, and clouds are gathering over one part of Jupiter, while dissipating over another. The results were presented today by Glenn Orton, a senior research scientist at NASA's Jet Propulsion Laboratory, Pasadena, Calif., at the American Astronomical Society's Division for Planetary Sciences Meeting in Reno, Nev.

"The changes we're seeing in Jupiter are global in scale," Orton said. "We've seen some of these before, but never with modern instrumentation to clue us in on what's going on. Other changes haven't been seen in decades, and some regions have never been in the state they're appearing in now. At the same time, we've never seen so many things striking Jupiter. Right now, we're trying to figure out why this is all happening."

Orton and colleagues Leigh Fletcher of the University of Oxford, England; Padma Yanamandra-Fisher of the Space Science Institute, Boulder, Colo.; Thomas Greathouse of Southwest Research Institute, San Antonio; and Takuya Fujiyoshi of the Subaru Telescope, National Astronomical Observatory of Japan, Hilo, Hawaii, have been taking images and maps of Jupiter at infrared wavelengths from 2009 to 2012 and comparing them with high-quality visible images from the increasingly active amateur astronomy community. Following the fading and return of a prominent brown-colored belt just south of the equator, called the South Equatorial Belt, from 2009 to 2011, the team studied a similar fading and darkening that occurred at a band just north of the equator, known as the North Equatorial Belt. This belt grew whiter in 2011 to an extent not seen in more than a century. In March of this year, that northern band started to darken again.

The team obtained new data from NASA's Infrared Telescope Facility and the Subaru Telescope on Mauna Kea that matched up that activity with infrared observations. Those data showed a simultaneous thickening of the deeper cloud decks, but not necessarily the upper cloud deck, unlike the South Equatorial Belt, where both levels of clouds thickened and then cleared up. The infrared data also resolved brown, elongated features in the whitened area called "brown barges" as distinct features and revealed them to be regions clearer of clouds and probably characterized by downwelling, dry air.

The team was also looking out for a series of blue-gray features along the southern edge of the North Equatorial Belt. Those features appear to be the clearest and driest regions on the planet and show up as apparent hotspots in the infrared view, because they reveal the radiation emerging from a very deep layer of Jupiter's atmosphere. (NASA's Galileo spacecraft sent a probe into one of these hotspots in 1995.) Those hotspots disappeared from 2010 to 2011, but had reestablished themselves by June of this year, coincident with the whitening and re-darkening of the North Equatorial Belt.

While Jupiter's own atmosphere has been churning through change, a number of objects have hurtled into Jupiter's atmosphere, creating fireballs visible to amateur Jupiter watchers on Earth. Three of these objects – probably less than 45 feet (15 meters) in diameter – have been observed since 2010. The latest of these hit Jupiter on Sept. 10, 2012, although Orton and colleagues' infrared investigations of these events showed this one did not cause lasting changes in the atmosphere, unlike those in 1994 or 2009.

"It does appear that Jupiter is taking an unusual beating over the last few years, but we expect that this apparent increase has more to do with an increasing cadre of skilled amateur astronomers training their telescopes on Jupiter and helping scientists keep a closer eye on our biggest planet," Orton said. "It is precisely this coordination between the amateur-astronomy community that we want to foster."

The California Institute of Technology, Pasadena, operates the Jet Propulsion Laboratory for NASA.