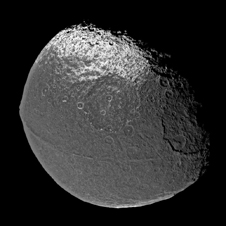 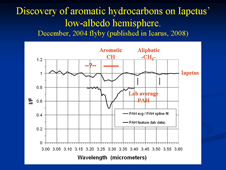 This figure shows the match between the Iapetus spectrum and a laboratory-made hydrocarbon spectrum, which is a polycyclic aromatic hydrocarbon.
Photo Credit: NASA
For more than 30 years, scientists have been observing an unknown substance on the dark surfaces of objects far beyond the Earth in the outer solar system. After analyzing images from the Cassini spacecraft, scientists are able to finally verify the unknown substance as organic solids as seen on the deep red surfaces of Saturn's moons Iapetus, Phoebe, and Hyperion.

"The surface material of these outer objects was always a mystery," said Dale Cruikshank, a space scientist at NASA Ames Research Center, Moffett Field, Calif. “We are interested in them because they represent the primordial material that can help us understand the formation of the Earth and other planets in the giant cloud of gas and dust in which it all occurred, including the chemistry of the materials needed for the origin of life on Earth."

After studying large samples of asteroids for years, scientists knew that these samples ranged in color from neutral gray to deep red, but were never able to match their color and intensity to any known substance.

Minerals and ices cannot match the strong, spectral reds of solar system bodies, so the assumption became "something else" was present on those surfaces.

Then in the late 1970s, scientists made an organic substance in the laboratory that matched the reddest asteroids. The substance's color spectrum ranged from yellow to red to black, and was termed "tholin" by Carl Sagan in 1980. Scientists measured and modeled the optical properties of tholins, and found that the tholins matched the observed red color of the majority of the most distant asteroids.

After years of waiting to verify their suspicions, the visible and infrared mapping spectrometer (VIMS) instrument on the Cassini spacecraft focused on one of the reddest bodies in the solar system, Saturn's moon, Iapetus, and measured the optical properties of its surface, which closely matched the red spectrum of tholins.

According to Cruikshank, the detection of hydrocarbons on Iapetus has implications for the surface appearance of a great number of other smaller bodies in the outer solar system. When the Iapetus material was closely modeled using carbon-rich tholins as the primary component, the overall reflected surface color was produced. Likewise, when red-colored Kuiper Belt Objects (KBOs) and other small objects were modeled using tholins, they produced similar results.

Because the deep red surface areas matched the deep red hydrocarbon tholins, it's assumed that the red-colored surface materials of other small bodies may also contain hydrocarbon organic material, even though they have a different structure, composition and nature than the synthetic tholins made in the laboratory.

Most of the early organic material found scattered on these distant objects and throughout space remains chemically unaltered, but researchers believe its formation and subsequent processing by ultraviolet radiation, galactic cosmic radiation, and charged particles from the magnetosphere of Saturn influenced its abundances and evolution over time.

When these processes were simulated in the laboratory, it was discovered that small carbon particles exposed to high heat (ultraviolet radiation) lose hydrogen atoms and become a new, darker substance similar to the interstellar dust grains prominent throughout space.

This darkening and dehydrogenation of organic molecules by ultraviolet radiation in the laboratory may represent the same basic mechanism that occurs on planetary surfaces when exposed to the harsh conditions of the space environment over prolonged periods of time. It may account for the wide range of surface colors among the dark planetary satellites, KBOs, and similar objects, called Centaurs, according to scientists.

"After many years of speculation, Cassini has now shown us that complex organic molecules are indeed scattered throughout the solar system. Some of this material also is found in comets, which brought both water and the complex organic chemicals to the Earth at about the time life originated on our planet, more than three billion years ago," said Cruikshank.

"Organic matter in the solar system: from colors to spectral bands," by Dale Cruikshank, Proceedings IAU Symposium no. 251, 2008.

The Cassini mission is a joint project of NASA and the European Space Agency. It has been in orbit around Saturn since January, 2005, and continues to send astonishingly clear images and other data about Saturn and its rings, as well as its moons and magnetic field.