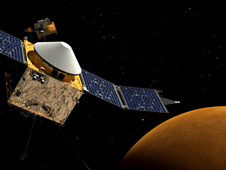 This oblique, southward-looking view of Gale crater shows the landing site and the mound of layered rocks that NASA's Mars Science Laboratory will investigate. The landing site is in the smooth area in front of the mound (marked by a yellow ellipse, which is 12.4 miles [20 kilometers] by 15.5 miles [25 kilometers]). Credit: NASA
› Larger image Maybe because it appears as a speck of blood in the sky, the planet Mars was named after the Roman god of war. From the point of view of life as we know it, that's appropriate. The Martian surface is incredibly hostile for life. The Red Planet's thin atmosphere does little to shield the ground against radiation from the Sun and space. Harsh chemicals, like hydrogen peroxide, permeate the soil. Liquid water, a necessity for life, can't exist for very long here—any that does not quickly evaporate in the diffuse air will soon freeze out in subzero temperatures common over much of the planet.

It wasn't always this way. There are signs that in the distant past, billions of years ago, Mars was a much more inviting place. Martian terrain is carved with channels that resemble dry riverbeds. Spacecraft sent to orbit Mars have identified patches of minerals that form only in the presence of liquid water. It appears that in its youth, Mars was a place that could have harbored life, with a thicker atmosphere warm enough for rain that formed lakes or even seas.

Two new NASA missions, one that will roam the surface and another that will orbit the planet and dip briefly into its upper atmosphere, will try to discover what transformed Mars. "The ultimate driver for these missions is the question, did Mars ever have life?" says Paul Mahaffy of NASA's Goddard Space Flight Center in Greenbelt, Md. "Did microbial life ever originate on Mars, and what happened to it as the planet changed? Did it just go extinct, or did it go underground, where it would be protected from space radiation and temperatures might be warm enough for liquid water?"

The Mars Science Laboratory (MSL) mission features Curiosity, the largest and most advanced rover ever sent to the Red Planet. The Curiosity rover bristles with multiple cameras and instruments, including Goddard's Sample Analysis at Mars (SAM) instrument suite. By looking for evidence of water, carbon, and other important building blocks of life in the Martian soil and atmosphere, SAM will help discover whether Mars ever had the potential to support life. Scheduled to launch in late November or December 2011, Curiosity will be delivered to Gale crater, a 96-mile-wide crater that contains a record of environmental changes in its sedimentary rock, in August 2012.

The Mars Atmosphere and Volatile EvolutioN (MAVEN) mission, scheduled to launch in late 2013, will orbit Mars and is devoted to understanding the Red Planet's upper atmosphere. It will help determine what caused the Martian atmosphere—and water— to be lost to space, making the climate increasingly inhospitable for life.

"Both MAVEN and Curiosity/SAM will determine the history of the Martian climate and atmosphere using multiple approaches," said MAVEN Principal Investigator Bruce Jakosky of the University of Colorado’s Laboratory for Atmospheric and Space Physics. "Measurements of isotope ratios are an approach shared by both missions."

Isotopes are heavier versions of an element. For example, deuterium is a heavy version of hydrogen. Normally, two atoms of hydrogen join to an oxygen atom to make a water molecule, but sometimes the heavy (and rare) deuterium takes a hydrogen atom's place.

When water gets lofted into Mars' upper atmosphere, solar radiation can break it apart into hydrogen (or deuterium) and oxygen. Hydrogen escapes faster because it is lighter than deuterium. Since the lighter version escapes more often, over time, the Martian atmosphere has less and less hydrogen compared to the amount of deuterium remaining. The Martian atmosphere therefore becomes richer and richer in deuterium.

The MAVEN team will measure the amount of deuterium compared to the amount of hydrogen in Mars' upper atmosphere, which is the planet's present-day deuterium to hydrogen (D/H) ratio. They will compare it to the ratio Mars had when it was young—the early D/H ratio. (The early ratio can be measured from the D/H ratio in ancient Martian minerals and estimated from observations of the D/H ratio in comets and asteroids, which are believed to be pristine, "fossil" remnants of our solar system's formation.)

Comparing the present and early D/H ratios will allow the team to calculate how much hydrogen (and, therefore, water) has been lost over Mars' lifetime. MAVEN will also determine how much Martian atmosphere has been lost over time by measuring the isotope ratios of other elements in the very high atmosphere, such as nitrogen, oxygen, carbon, and noble gases like argon.

MAVEN is expected to reach Mars in 2014. By then, SAM on board the Curiosity rover will have made similar measurements from Gale crater, which will help guide the interpretation of MAVEN's upper atmosphere measurements.

Measuring isotopes in the atmosphere will reveal its present state. To find out what the Martian atmosphere was like in the past, scientists will use what they discover with MAVEN about the various ways the atmosphere is being removed. With that data, they will build computer simulations, or models, to estimate the condition of the Red Planet's atmosphere billions of years ago.

Scientists estimate Gale crater may have formed more than three billion years ago. Curiosity will grind up Gale crater minerals and deliver them to SAM so the isotope ratios can be measured, giving a glimpse at the Martian atmosphere from long ago, perhaps when it could have supported life. "SAM's inputs from the surface of past Martian history will help the MAVEN team work backwards to discover how the Martian atmosphere evolved," said Joseph Grebowsky of NASA Goddard, MAVEN Project Scientist.

"For example, MAVEN will focus primarily on how solar activity erodes the Martian atmosphere," adds Mahaffy. Things like the solar wind, a tenuous stream of electrically conducting gas blown from the surface of the Sun, and explosions in the Sun's atmosphere called solar flares, and eruptions of solar material called coronal mass ejections can all strip away the upper atmosphere of Mars in various ways. "If we figure out how much atmosphere is removed by changes in solar activity, we can extrapolate back to estimate what the isotope ratios should have been billions of years ago. However, if the measurements of the ancient ratios from SAM don't match up, this suggests that we may have to look at other ways the atmosphere could have been lost, such as giant impacts from asteroids," says Mahaffy, who is Principal Investigator for SAM and Instrument Lead for the Neutral Gas and Ion Mass Spectrometer instrument on MAVEN. Some scientists believe giant impacts could have blasted significant amounts of the Martian atmosphere into space.

Also, Curiosity will carry a weather station, which will help the MAVEN team understand how changes in the upper atmosphere are related to changes at the surface. "For example, if the rover detects a dust storm, it may have an effect higher up because of the winds and the gravity waves (the bobbing up and down of a parcel of air) it sets up," says Grebowsky.

"Curiosity will focus on geology and minerals to determine if the environment on Mars in the distant past had the potential to support life," said Mahaffy. "It will be digging in the dirt trying to understand the habitability issue in a place where water may have flowed, where there could have been a lake. Habitability is also the basic theme of MAVEN—it will be trying to understand from the top down how the atmosphere evolved over time and how it was lost, which ties back to how clement it was early on."

MAVEN is part of NASA's Mars Scout program, funded by NASA Headquarters, Washington, D.C. The project is led out of the University of Colorado and managed by NASA Goddard. The Mars Science Laboratory is managed for NASA’s Science Mission Directorate, Washington, D.C., by NASA's Jet Propulsion Laboratory, a division of the California Institute of Technology in Pasadena. Bill Steigerwald
NASA's Goddard Space Flight Center, Greenbelt, Md.
› Back To Top