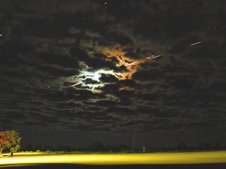 JAXA’s Hayabusa spacecraft leaves a streak of light behind the clouds is as it re-enters Earth’s atmosphere over the Woomera Test Range in Australia.
Credit: NASA/Ed Schilling 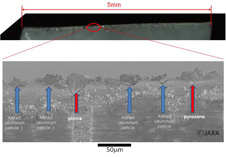 On June 14, 2010 (local time), Hayabusa landed in the remote Woomera Test Range in South Australia, concluding a remarkable mission of exploration -- one in which NASA scientists and engineers played a contributing role.

Initial research from an electron microscope reveals about 1500 grains identified as rocky particles, and judged to be of extraterrestrial origin from the asteroid. Their size is mostly less than 10 micrometers. Handling these grains requires very special skills and techniques. JAXA is developing the necessary handling techniques and preparing the associated equipment for further analyses.

The 510-kilogram (950-pound) Hayabusa spacecraft rendezvoused with asteroid Itokawa in September 2005. Over the next two-and-a-half months, the spacecraft made up-close and personal scientific observations of the asteroid's shape, terrain, surface altitude distribution, mineral composition, gravity, and the way it reflected the sun's rays. On Nov. 25 of that year, Hayabusa briefly touched down on the surface of Itokawa. That was only the second time in history a spacecraft descended to the surface of an asteroid (NASA's Near Earth Asteroid Rendezvous-Shoemaker spacecraft landed on asteroid Eros on Feb. 12, 2001).

The spacecraft departed Itokawa in January 2007. A team of Japanese and American navigators guided Hayabusa on the final leg of its journey. Together, they calculated the final trajectory correction maneuvers Hayabusa's ion propulsion system had to perform for a successful homecoming.

To obtain the data they needed, the navigation team frequently called upon JAXA's tracking stations in Japan, as well as those of NASA's Deep Space Network, which has antennas at Goldstone, in California's Mojave Desert; near Madrid, Spain; and near Canberra, Australia. In addition, the stations provided mission planners with near-continuous communications with the spacecraft to keep them informed on spacecraft health.

After the spacecraft returned, team members retrieved it and transported it to JAXA's sample curatorial facility in Sagamihara, Japan. There, Japanese astromaterials scientists, assisted by two scientists from NASA and one from Australia, performed preliminary cataloging and analysis of the capsule's contents.

For more information about the Hayabusa mission, visit: http://www.isas.jaxa.jp/e/enterp/missions/hayabusa/index.shtml.
› Back To Top