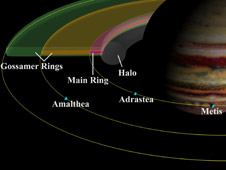 Jupiter's system of rings. The orbits of the innermost moons are marked. Image credit: NASA/JPL/Cornell University
›  Larger view
Using data from NASA's Galileo spacecraft, scientists have shown that Jupiter's shadow is shaping the planet's rings and the orbits of particles within the rings. The findings appear in the May 1 issue of Nature.

Jupiter's rings are faint and not nearly as visible or stately as those of Saturn. They were discovered in 1979 by NASA's Voyager spacecraft and consist of tiny particles created by collisions between Jupiter's moons and meteorites. These grains are so tiny, a thousand of them put together are only a millimeter long. That makes them as small as the particles in cigarette smoke. Galileo was able to directly measure these particles.

Scientists studied the ring near Jupiter's moon Thebe. "We found that Jupiter's shadow plays an important role in shaping the ring," said Douglas Hamilton from the University of Maryland at College Park.

"On Jupiter's day side, the sunlight charges the dust particles positively, while on the night side the particles carry a negative charge. Different charges react differently to Jupiter's magnetic field, leading to changes in particle orbits, and when conditions are right, even the tilt or inclinations of the ring particles change," Hamilton said.

For example, some dust grains are forced to follow orbits tilted within the ring by about 20 degrees from Jupiter's equator. This surprised scientists because particles in the visible rings have orbits tilted by only about 1 degree.

Hamilton said that dust around planets acquires electric charges by collisions with orbiting plasma. Sunlight acts like a light switch, literally, and frees electrons from the surfaces of the ring particles. "So in sunlight, electrons are forced off the dust grains but during shadow passages they return," he said.

The data were recorded by Galileo, which flew around Jupiter for seven years before it was put in a controlled dive in 2003 to end its mission by plummeting through Jupiter's atmosphere. The spacecraft's supersensitive dust detector registered thousands of impacts from dust particles on its way through Jupiter's ring system in 2002 and 2003.

Through computer models, scientists were able to account for new ring phenomena. "Our measurements reveal properties of the ring that were unknown," said Harald Krüger from the Max-Planck-Institute for Solar System Research in Germany. For example, dust particles can be found farther from the planet than researchers assumed. "Apart from that, some particles have orbits which are strongly tilted from Jupiter's equator," Krüger adds.

These results are significant because electrically charged dust particles are of great importance in the birth of planets. Planets are thought to have been born from a disk of dust and gas.

"Jupiter's rings are like a laboratory, in which we can study dusty astrophysical processes," Krüger added.