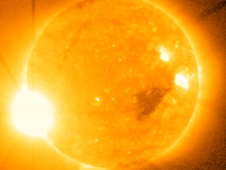 The X9-class solar flare of Dec. 5, 2006, observed by the Solar X-Ray Imager aboard NOAA's GOES-13 satellite. Credit: NOAA's Space Weather Prediction Center
> Larger image
> Larger image, labeled
Solar flares are the most powerful explosions in the solar system. Packing a punch equal to a hundred million hydrogen bombs, they obliterate everything in their immediate vicinity. Not a single atom should remain intact.

At least that’s how it’s supposed to work.

"We’ve detected a stream of perfectly intact hydrogen atoms shooting out of an X-class solar flare," says Richard Mewaldt of the California Institute of Technology. "What a surprise! If we can understand how these atoms were produced, we'll be that much closer to understanding solar flares."

The event occurred on Dec. 5, 2006. A large sunspot rounded the sun’s eastern limb and with little warning it exploded. On the "Richter scale" of flares, which ranks X1 as a big event, the blast registered X9, making it one of the strongest flares of the past 30 years.

NASA managers braced themselves. Such a ferocious blast usually produces a blizzard of high-energy particles dangerous to both satellites and astronauts. An hour later they arrived, but they were not the particles researchers expected.

NASA’s twin Solar TErrestrial RElations Observatory (STEREO) spacecraft made the discovery: "It was a burst of hydrogen atoms," says Mewaldt. "No other elements were present, not even helium (the sun’s second-most abundant atomic species). Pure hydrogen streamed past the spacecraft for a full 90 minutes." 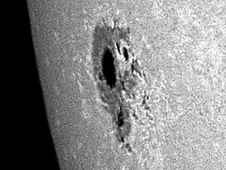 Sunspot 930, the source of the powerful X9-flare on Dec. 5, 2006. Credit: John Nassr of the Philippines.
> Larger image Next came 30 minutes of quiet. The burst subsided and STEREO’s particle counters returned to low levels. The event seemed to be over when a second wave of particles enveloped the spacecraft. These were the "broken atoms" flares are supposed to produce—protons and heavier ions such as helium, oxygen and iron. "Better late than never," he says.

At first, this unprecedented sequence of events baffled scientists, but now Mewaldt and colleagues believe they’re getting to the bottom of the mystery.

First, how did the hydrogen atoms resist destruction?

"They didn’t," says Mewaldt. "We believe they began their journey to Earth in pieces, as protons and electrons. Before they escaped the sun’s atmosphere, however, some of the protons captured an electron, forming intact hydrogen atoms. The atoms left the sun in a fast, straight shot before they could be broken apart again." (For experts: The team believes the electrons were recaptured by some combination of radiative recombination and charge exchange.)

Second, what delayed the ions? 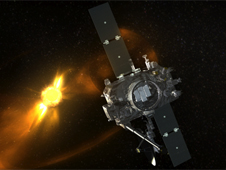 Artist's concept of one of the STEREO satellites. Credit: NASA
> Larger image "Simple," says Mewaldt. "Ions are electrically charged and they feel the sun’s magnetic field. Solar magnetism deflects ions and slows their progress to Earth. Hydrogen atoms, on the other hand, are electrically neutral. They can shoot straight out of the sun without magnetic interference."

Imagine two runners dashing for the finish line. One (the ion) is forced to run in a zig-zag pattern with zigs and zags as wide as the orbit of Mars. The other (the hydrogen atom) runs in a straight line. Who’s going to win?

Mewaldt believes that all strong flares might emit hydrogen bursts, but they simply haven’t been noticed before. He’s looking forward to more X-flares now that the two STEREO spacecraft are widely separated on nearly opposite sides of the Sun. (In 2006 they were still together near Earth.) STEREO-A and –B may be able to triangulate future bursts and pinpoint the source of the hydrogen. This would allow the team to test their ideas about the surprising phenomenon.

For more information about this research, look for the article "STEREO Observations of Energetic Neutral Atoms during the 5 December 2006 Solar Flare" by R. A. Mewaldt et al., in a future issue of the Astrophysical Journal Letters.