Grow Text SizeShrink Text Size
A Solar System Family Portrait, From the Inside Out 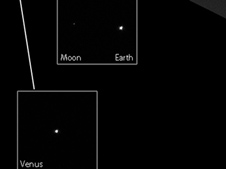 NASA's MESSENGER spacecraft has constructed the first portrait of our solar system by combining 34 images taken by the spacecraft’s Wide Angle Camera on Nov. 3 and 16, 2010.
› Larger Image 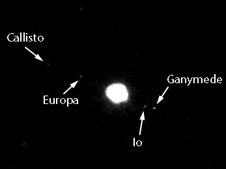 NASA's MESSENGER spacecraft did just that by piecing together the first portrait of our solar system from the inside looking out. Comprised of 34 images, the mosaic provides a complement to the solar system portrait--from the outside looking in--taken by Voyager 1 in 1990.

"Obtaining this portrait was a terrific feat by the MESSENGER team," says MESSENGER principal investigator Sean Solomon, of the Carnegie Institution of Washington. "This snapshot of our neighborhood also reminds us that Earth is a member of a planetary family that was formed by common processes four and a half billion years ago. Our spacecraft is soon to orbit the innermost member of the family, one that holds many new answers to how Earth-like planets are assembled and evolve."

MESSENGER's Wide Angle Camera (WAC) captured the images on Nov. 3 and 16, 2010. In the mosaic, all of the planets are visible except for Uranus and Neptune, which--at distances of 3.0 and 4.4 billion kilometers--were too faint to detect. Earth's moon and Jupiter's Galilean satellites (Callisto, Ganymede, Europa and Io) can be seen in the WAC image insets. The solar system's perch on a spiral arm of the Milky Way galaxy also afforded a beautiful view of a portion of the galaxy in the bottom center.

"The curved shape of the mosaic is due to the inclination of MESSENGER's orbit from the ecliptic, the plane in which Earth and most planets orbit, which means that the cameras must point up to see some planets and down to see others," explains imaging team member Brett Denevi of the Johns Hopkins University Applied Physics Laboratory (APL) in Laurel, Md. "The images are stretched to make it easier to detect the planets, though this stretch also highlights light scattered off of the planet limbs, and in some cases creates artifacts such as the non-spherical shape of some planets."

Assembling this portrait was no easy feat, says Solomon. "It's not easy to find a moment when many of the planets are within a single field of view from that perspective, and we have strong Sun-pointing constraints on our ability to image in some directions."

APL's Hong Kang, from MESSENGER’s guidance and control team, used the Jet Propulsion Laboratory's Solar System Simulator to pinpoint the relative positions of MESSENGER and the planets to determine if it was possible to see the planets from MESSENGER at any given time.

"I used the celestial coordinates of the planets at the time I wanted to observe them to verify with simulations that MESSSENGER could see each of the planets," Kang explains. "I also used a satellite tool kit to verify that we had the planets in the field of view of MESSENGER’s Mercury Dual Imaging System."

The MESSENGER team then had to determine how long the exposures needed to be for each planet.

"From exposure times that worked for previous imaging of stars with visual magnitudes similar to those of the planets, we chose exposure times that would allow us to obtain the appropriate number of counts (i.e., amount of light) in each planet image," explains APL's Nori Laslo, the mission's Operations Lead and Instrument Sequencer for MDIS.

"We decided to take images using both the Narrow Angle Camera and the Wide Angle Camera for each planet so that we would cover the sky surrounding the planets and also image the planets themselves at as high a resolution as possible," she adds. "I took all of these parameters, along with a variety of related settings, and began building the command sequence with the library of MDIS commands that we have to configure and control the camera system."

Robin Vaughan, who worked with Kang to coordinate the pointing and timing of the MDIS, also played a role in Voyager's portrait.

"I was working as an optical navigation analyst at JPL for the Voyager Neptune encounter," says Vaughan, the lead engineer for MESSENGER's guidance and control (attitude control) subsystem at APL. "I had to plan and generate the pointing commands for pictures of Neptune and its satellites against background stars that we used to improve our estimate of the spacecraft's trajectory leading up to the Neptune encounter. Voyager's solar system portrait was done a few years after that flyby and was coordinated by the imaging team. Our optical navigation image planning software was used to double check the pointing commands they had designed and confirm what they expected to see in each image."

Vaughan did the same thing for MESSENGER’s portrait, using Kang’s designs. "I used the SPICE trajectory files for the spacecraft generated by MESSENGER's navigation team, as well as routines in the SPICE toolkit, to write a software program that would identify windows when each of the planets would be visible to MDIS given the constraints on pivot angle and Sun keep-in zone for spacecraft attitude," she says.

From a technical standpoint, the MESSENGER portrait was a little more complicated than what was done for Voyager because we had to stay within the Sun keep-in constraints. "With Voyager so far out in the solar system, the Sun is much fainter and there were no constraints on the overall spacecraft attitude as far as the Sun was concerned," Vaughan says. "Being in the inner solar system, MESSENGER has to constantly keep the sunshade pointing toward the sun, which limits the periods when the different planets can be viewed even with the extra degree of freedom that MDIS has with its pivot capability."

Denevi says the experiment was humbling. "Seeing our solar system as just these little specks of light, it reminds you of how lucky we are that we've had the chance, through so many missions, to get up close and explore the incredible diversity and geology that each planet and moon displays," she says. "Mercury has been just a dot on the horizon for most of history, and we get to fill in the details and know it as a real world. What an amazing opportunity!"