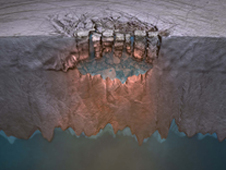 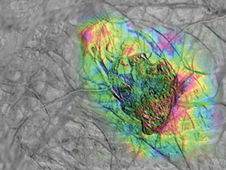 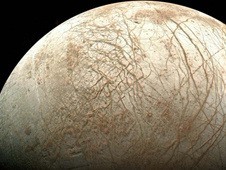 Europa, as viewed from NASA’s Galileo spacecraft. Visible are plains of bright ice, cracks that run to the horizon, and dark patches that likely contain both ice and dirt. Image Credit: NASA Data from a NASA planetary mission have provided scientists evidence of what appears to be a body of liquid water, equal in volume to the North American Great Lakes, beneath the icy surface of Jupiter's moon, Europa.

The data suggest there is significant exchange between Europa's icy shell and the ocean beneath. This information could bolster arguments that Europa's global subsurface ocean represents a potential habitat for life elsewhere in our solar system. The findings are published in the scientific journal Nature.

"The data opens up some compelling possibilities," said Mary Voytek, director of NASA's Astrobiology Program at agency headquarters in Washington. "However, scientists worldwide will want to take a close look at this analysis and review the data before we can fully appreciate the implication of these results."

NASA's Galileo spacecraft, launched by the space shuttle Atlantis in 1989 to Jupiter, produced numerous discoveries and provided scientists decades of data to analyze. Galileo studied Jupiter, which is the most massive planet in the solar system, and some of its many moons.

One of the most significant discoveries was the inference of a global salt water ocean below the surface of Europa. This ocean is deep enough to cover the whole surface of Europa and contains more liquid water than all of Earth's oceans combined. However, being far from the sun, the ocean surface is completely frozen. Most scientists think this ice crust is tens of miles thick.

"One opinion in the scientific community has been if the ice shell is thick, that's bad for biology. That might mean the surface isn't communicating with the underlying ocean," said Britney Schmidt, lead author of the paper and postdoctoral fellow at the Institute for Geophysics, University of Texas at Austin. "Now, we see evidence that it's a thick ice shell that can mix vigorously and new evidence for giant shallow lakes. That could make Europa and its ocean more habitable."

Schmidt and her team focused on Galileo images of two roughly circular, bumpy features on Europa's surface called chaos terrains. Based on similar processes seen on Earth -- on ice shelves and under glaciers overlaying volcanoes -- they developed a four-step model to explain how the features form. The model resolves several conflicting observations. Some seemed to suggest the ice shell is thick. Others suggest it is thin.

This recent analysis shows the chaos features on Europa's surface may be formed by mechanisms that involve significant exchange between the icy shell and the underlying lake. This provides a mechanism or model for transferring nutrients and energy between the surface and the vast global ocean already inferred to exist below the thick ice shell. This is thought to increase the potential for life there.

The study authors have good reason to believe their model is correct, based on observations of Europa from Galileo and of Earth. Still, because the inferred lakes are several miles below the surface, the only true confirmation of their presence would come from a future spacecraft mission designed to probe the ice shell. Such a mission was rated as the second highest priority flagship mission by the National Research Council's recent Planetary Science Decadal Survey and is being studied by NASA.

"This new understanding of processes on Europa would not have been possible without the foundation of the last 20 years of observations over Earth's ice sheets and floating ice shelves," said Don Blankenship, a co-author and senior research scientist at the Institute for Geophysics, where he leads airborne radar studies of the planet's ice sheets.

Galileo was the first spacecraft to directly measure Jupiter's atmosphere with a probe and conduct long-term observations of the Jovian system. The probe was the first to fly by an asteroid and discover the moon of an asteroid. NASA extended the mission three times to take advantage of Galileo's unique science capabilities, and it was put on a collision course into Jupiter's atmosphere in September 2003 to eliminate any chance of impacting Europa.

The Galileo mission was managed by NASA's Jet Propulsion Laboratory in Pasadena, Calif., for the agency's Science Mission Directorate.

For images and a video animation of the findings, visit the University of Texas at Austin. Dwayne Brown
Headquarters, Washington
202-358-1726
dwayne.c.brown@nasa.gov