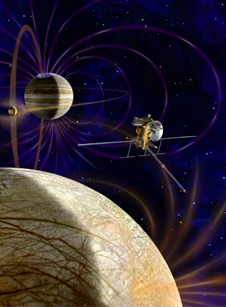 This artist’s concept shows NASA's Jupiter Europa Orbiter which will carry a complement of 11 instruments to explore Europa and the Jupiter System. The spacecraft is part of the joint NASA-ESA Europa Jupiter System Mission (EJSM). Image credit: NASA/ESA
› Larger view

With input from scientists around the world, American and European scientists working on the potential next new mission to the Jupiter system have articulated their joint vision for the Europa Jupiter System Mission. The mission is a proposed partnership between NASA and the European Space Agency. The scientists on the joint NASA-ESA definition team agreed that the overarching science theme for the Europa Jupiter System Mission will be "the emergence of habitable worlds around gas giants."

"We've reached hands across the Atlantic to define a mission to Jupiter's water worlds," said Bob Pappalardo, the pre-project scientist for the proposed Jupiter Europa Orbiter, who is based at NASA's Jet Propulsion Laboratory in Pasadena, Calif. "The Europa Jupiter System Mission will create a leap in scientific knowledge about the moons of Jupiter and their potential to harbor life."

The new reports integrate goals that were being separately developed by NASA and ESA working groups into one unified strategy.

The ESA report is being presented to the European public and science community this week, and the NASA report was published online in December. The NASA report is available at http://www.lpi.usra.edu/opag .

The proposed mission singles out the icy moons Europa and Ganymede as special worlds that can lead to a broader understanding of the Jovian system and of the possibility of life in our solar system and beyond. They are natural laboratories for analyzing the nature, evolution and potential habitability of icy worlds, because they are believed to present two different kinds of sub-surface oceans.

The Jupiter Europa Orbiter would characterize the relatively thin ice shell above Europa's ocean, the extent of that ocean, the materials composing its internal layers, and the way surface features such as ridges and "freckles" formed. It will also identify candidate sites for potential future landers. Instruments that might be on board could include a laser altimeter, an ice-penetrating radar, spectrometers that can obtain data in visible, infrared and ultraviolet radiation, and cameras with narrow- and wide-angle capabilities. The actual instruments to fly would be selected through a NASA competitive call for proposals.

Ganymede is thought to have a thicker ice shell, with its interior ocean sandwiched between ice above and below. ESA's Jupiter Ganymede Orbiter would investigate this different kind of internal structure. The Jupiter Ganymede Orbiter would also study the intrinsic magnetic field that makes Ganymede unique among all the solar system's known moons. This orbiter, whose instruments would also be chosen through a competitive process, could include a laser altimeter, spectrometers and cameras, plus additional fields-and-particles instruments

The two orbiters would also study other large Jovian moons, Io and Callisto, with an eye towards exploring the Jupiter system as an archetype for other gas giant planets.

NASA and ESA officials gave the Europa Jupiter System Mission proposal priority status for continued study in 2009, agreeing that it was the most technically feasible of the outer solar system flagship missions under consideration.

Over the next few months, NASA officials will be analyzing the joint strategy and awaiting the outcome of the next Planetary Science Decadal Survey by the National Research Council of the U.S. National Academies. That survey will serve as a roadmap for new NASA planetary missions for the decade beginning 2013.

For more information about the Europa Jupiter System Mission, go to http://opfm.jpl.nasa.gov/europajupitersystemmissionejsm/ .