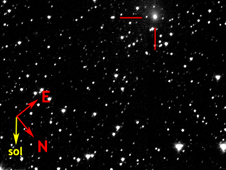 On Sunday, Sept. 5, NASA's Deep Impact spacecraft beamed down the first of more than 64,000 images it's expected to take of Comet Hartley 2. The spacecraft, now on an extended mission known as EPOXI, has an appointment with the comet on Nov. 4, 2010.

It will use all three of the spacecraft's instruments (two telescopes with digital color cameras and an infrared spectrometer) to scrutinize Hartley 2 for more than two months.

"Like any tourist who can't wait to get to a destination, we have already begun taking pictures of our comet -- Hartley 2," said Tim Larson, the project manager for EPOXI from NASA's Jet Propulsion Laboratory in Pasadena, Calif. "We have to wait for Nov. 4 to get the close-up pictures of the cometary nucleus, but these approach images should keep the science team busy for quite some time as well."

The imaging campaign, along with data from all the instruments aboard Deep Impact, will afford the mission's science team the best extended view of a comet in history during its pass through the inner solar system. With the exception of one, six-day break to calibrate instruments and perform a trajectory correction maneuver, the spacecraft will continuously monitor Hartley 2's gas and dust output for the next 79 days.

This first image of comet Hartley 2 taken by Deep Impact was obtained by the spacecraft's Medium Resolution Imager on Sept. 5 when the spacecraft was 60 million kilometers (37.2 million miles) away from the comet.

EPOXI is an extended mission that utilizes the already "in flight" Deep Impact spacecraft to explore distinct celestial targets of opportunity. The name EPOXI itself is a combination of the names for the two extended mission components: the extrasolar planet observations, called Extrasolar Planet Observations and Characterization (EPOCh), and the flyby of comet Hartley 2, called the Deep Impact Extended Investigation (DIXI). The spacecraft will continue to be referred to as "Deep Impact."