COLLEGE PARK, Md. -- NASA's Deep Impact spacecraft has created a video of the moon transiting (passing in front of) Earth as seen from the spacecraft's point of view 31 million miles away. Scientists are using the video to develop techniques to study alien worlds.

"Making a video of Earth from so far away helps the search for other life-bearing planets in the Universe by giving insights into how a distant, Earth-like alien world would appear to us," said University of Maryland astronomer Michael A’Hearn, principal investigator for the Deep Impact extended mission, called EPOXI.

Deep Impact made history when the mission team directed an impactor from the spacecraft into comet Tempel 1 on July 4, 2005. NASA recently extended the mission, redirecting the spacecraft for a flyby of comet Hartley 2 on Nov. 4, 2010.

EPOXI is a combination of the names for the two extended mission components: a search for alien (extrasolar) planets during the cruise to Hartley 2, called Extrasolar Planet Observations and Characterization (EPOCh), and the flyby of comet Hartley 2, called the Deep Impact eXtended Investigation (DIXI). 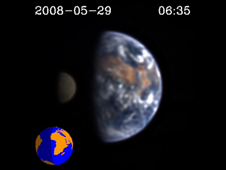 The two videos show Earth observed at different light wavelengths, which is why differences in details are visible. The first version uses a red-green-blue filter; the second, an infrared-green-blue.
Videos credit: Donald J. Lindler, Sigma Space Corporation/GSFC; EPOCh/DIXI Science Teams
> Watch Video 1
> Watch Video 2 During a full Earth rotation, images obtained by Deep Impact at a 15-minute cadence have been combined to make a color video. During the video, the moon enters the frame (because of its orbital motion) and transits Earth, then leaves the frame. Other spacecraft have imaged Earth and the moon from space, but Deep Impact is the first to show a transit of Earth with enough detail to see large craters on the moon and oceans and continents on Earth.

"To image Earth in a similar fashion, an alien civilization would need technology far beyond what Earthlings can even dream of building," said Sara Seager, a planetary theorist at the Massachusetts Institute of Technology, Cambridge, Mass., and a co-investigator on EPOXI. "Nevertheless, planet-characterizing space telescopes under study by NASA would be able to observe an Earth twin as a single point of light -- a point whose total brightness changes with time as different land masses and oceans rotate in and out of view. The video will help us connect a varying point of planetary light with underlying oceans, continents, and clouds -- and finding oceans on extrasolar planets means identifying potentially habitable worlds." said Seager.

"Our video shows some specific features that are important for observations of Earth-like planets orbiting other stars," said Drake Deming of NASA's Goddard Space Flight Center in Greenbelt, Md. Deming is deputy principal investigator for EPOXI, and leads the EPOCh observations. "A 'sun glint' can be seen in the movie, caused by light reflected from Earth's oceans, and similar glints to be observed from extrasolar planets could indicate alien oceans. Also, we used infrared light instead of the normal red light to make the color composite images, and that makes the land masses much more visible." That happens because plants reflect more strongly in the near-infrared, Deming explained. Hence the video illustrates the potential for detecting vegetated land masses on extrasolar planets by looking for variations in the intensity of their near-infrared light as the planet rotates.