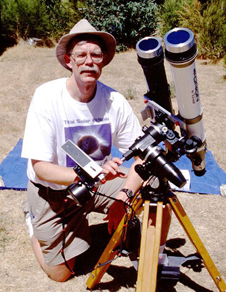 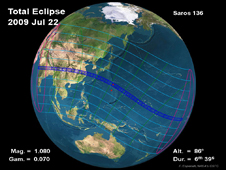 The path of the total solar eclipse on July 22, 2009, will sweep across nearly half of Earth, beginning in India and ending in the Pacific Ocean. Credit: NASA
› Larger image Have you ever glimpsed the moon's shadow as it passes in front of the sun's disk casting a dark shadow on Earth and revealing the sun's ephemeral outer atmosphere? Have you witnessed Earth's shadow as it slowly sweeps over a full moon, taking successively bigger bites until the entire disk is red-tinged and darkly shaded? If so, then you already know the wonderment of chasing celestial shadows.

And if you have ever looked up the "where," "when," and "what type" for an eclipse, you may be familiar with Fred Espenak, better known as "Mr. Eclipse."

American astrophysicist Fred Espenak has had a long and prolific career at NASA's Goddard Space Flight Center in Greenbelt, Md. Since 1978, Espenak has provided eclipse bulletins -- detailed descriptions of eclipse predictions, maps, and weather information for upcoming eclipses -- for NASA as well as inspiration to legions of eclipse aficionados. He also has authored several works on eclipse predictions, including the Fifty Year Canon of Solar Eclipses: 1986-2035 and the Fifty Year Canon of Lunar Eclipses: 1986-2035.

Espenak's passion for astronomy and eclipses began when he was about 7 or 8 years old. "I was visiting my grandparents out in their summer home in Long Island," he recalls. "One of the neighborhood boys had a small telescope. I remember taking a look at the moon through that telescope for the first time. I think I pestered my father for 2 years after that before I got my first telescope. And that just ignited my interest in astronomy."

Since then, Espenak has observed more than 20 eclipses in person. Whether total, partial or annular, each eclipse is as different in character as two siblings, says Espenak. "Each has special features to it," says Espenak.

Eclipses come in two types: solar and lunar. An eclipse of the sun happens when the moon passes directly between Earth and the sun. When the moon's shadow falls on Earth, people within that shadow see part (or all) of the sun's disk covered, or eclipsed, by the moon. During a lunar eclipse, Earth passes between the sun and moon and blocks sunlight from reaching the moon. Because of the geometry of eclipses, whether your see all or part of an eclipse depends on where you are located on Earth.

An eclipse of the sun can be total, partial, or annular. During a total solar eclipse, the moon blocks the sun's entire disk for those standing within the "path of totality," the path of the moon's dark inner shadow, or umbra. Observers in the moon's faint outer shadow (penumbra) will witness partial coverage of the sun.

An annular eclipse happens when the tip of the moon's umbra doesn't quite reach Earth. For observers situated beneath the umbral shadow, the moon will look slightly smaller than the sun, with a thin ring, or annulus, of sunlight remaining visible during the eclipse. An annular eclipse is also called a hybrid eclipse.

Which kind of eclipse is Espenak's favorite? "I like solar eclipses and lunar eclipses for two different reasons."

"Nothing can compare to a total solar eclipse," he says. "But you're putting all your eggs in one basket when you go on a solar eclipse expedition because you've only got usually two, or three, or four precious minutes when you've got that opportunity to see the sun's corona. All the equipment has to be working perfectly. The weather has to cooperate. You've got to be at the right place at the right time. It is very stressful."

"A lunar eclipse is a very beautiful event, but it doesn't have that excitement of a solar eclipse, where you've just got those two minutes. The total phase usually lasts an hour or more, so it's much more of a leisurely event. You can sit back, watch, and relax." Lunar eclipses also happen more frequently than solar eclipses.

Though he recently retired from NASA, don't expect Espenak's passion for chasing shadows to wane any time soon. "I think the beauty of the eclipses is something that anybody can appreciate," he says. "What I usually tell people is if they ever have the opportunity to see a total solar eclipse, or if they're on a vacation and a total solar eclipse just happens to be taking place nearby, get into the path of the total eclipse," says Espenak.

His next expedition will take him to the Pacific Ocean to observe a total solar eclipse on July 22. The path of totality begins in India, crosses through Nepal, Bangladesh, Bhutan, Myanmar, and China. The duration of totality will last 6 minutes, 39 seconds. A partial eclipse will be visible in parts of Asia, Indonesia, and the Pacific Ocean.

For more information about the July 22 eclipse, visit www.nasa.gov/eclipse or http://eclipse.gsfc.nasa.gov