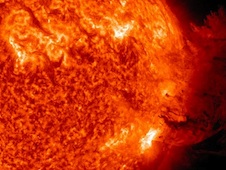 Coronal Mass Ejection as viewed by the Solar Dynamics Observatory on June 7, 2011. Credit: NASA/SDO
Full-resolution copy
Solar storms and associated Coronal Mass Ejections (CMEs) can significantly erode the lunar surface according to a new set of computer simulations by NASA scientists. In addition to removing a surprisingly large amount of material from the lunar surface, this could be a major method of atmospheric loss for planets like Mars that are unprotected by a global magnetic field.

The research is being led by Rosemary Killen at NASA's Goddard Space Flight Center, Greenbelt, Md., as part of the Dynamic Response of the Environment At the Moon (DREAM) team within the NASA Lunar Science Institute.

CMEs are basically an intense gust of the normal solar wind, a diffuse stream of electrically conductive gas called plasma that's blown outward from the surface of the Sun into space. A strong CME may contain around a billion tons of plasma moving at up to a million miles per hour in a cloud many times the size of Earth.


The moon has just the barest wisp of an atmosphere, technically called an exosphere because it is so tenuous, which leaves it vulnerable to CME effects. The plasma from CMEs impacts the lunar surface, and atoms from the surface are ejected in a process called "sputtering."

"We found that when this massive cloud of plasma strikes the moon, it acts like a sandblaster and easily removes volatile material from the surface," said William Farrell, DREAM team lead at NASA Goddard. "The model predicts 100 to 200 tons of lunar material – the equivalent of 10 dump truck loads – could be stripped off the lunar surface during the typical 2-day passage of a CME."

This is the first time researchers have attempted to predict the effects of a CME on the moon. "Connecting various models together to mimic conditions during solar storms is a major goal of the DREAM project," says Farrell.

Plasma is created when energetic events, like intense heat or radiation, remove electrons from the atoms in a gas, turning the atoms into electrically charged particles called ions. The Sun is so hot that the gas is emitted in the form of free ions and electrons called the solar wind plasma. Ejection of atoms from a surface or an atmosphere by plasma ions is called sputtering.

"Sputtering is among the top five processes that create the moon's exosphere under normal solar conditions, but our model predicts that during a CME, it becomes the dominant method by far, with up to 50 times the yield of the other methods," says Killen, lead author of a paper on this research appearing in a special issue of the Journal of Geophysical Research Planets.

CMEs are effective at removing lunar material not only because they are denser and faster than the normal solar wind, but also because they are enriched in highly charged, heavy ions, according to the team. The typical solar wind is dominated by lightweight hydrogen ions (protons). However, a heavier helium ion with more electrons removed, and hence a greater electric charge, can sputter tens of times more atoms from the lunar surface than a hydrogen ion.

The team used data from satellite observations that revealed this enrichment as input to their model. For example, helium ions comprise about four percent of the normal solar wind, but observations reveal that during a CME, they can increase to over 20 percent. When this enrichment is combined with the increased density and velocity of a CME, the highly charged, heavy ions in CMEs can sputter 50 times more material than protons in the normal solar wind. 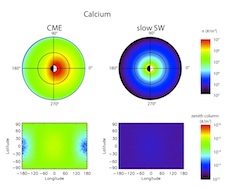 These are images from computer simulations of the lunar calcium exosphere during a CME (left) and the slow solar wind (right). Red and yellow indicate a relatively high abundance of calcium atoms while blue, purple, and black indicate a low abundance. The CME produces a much denser exosphere than the slow solar wind. Credit: NASA and the Johns Hopkins University Applied Physics Laboratory
View movie of simulation
"The computer models isolate the contributions from sputtering and other processes," says Dana Hurley, a co-author on the paper at the Johns Hopkins University Applied Physics Laboratory in Laurel, Md. "Comparing model predictions through a range of solar wind conditions allows us to predict the conditions when sputtering should dominate over the other processes. Those predictions can later be compared to data during a solar storm."

The researchers believe that NASA's Lunar Atmosphere And Dust Environment Explorer (LADEE) -- a lunar orbiter mission scheduled to launch in 2013 -- will be able to test their predictions. The strong sputtering effect should kick lunar surface atoms to LADEE's orbital altitude, around 20 to 50 kilometers (about 12.4 to 31 miles), so the spacecraft will see them increase in abundance.

"This huge CME sputtering effect will make LADEE almost like a surface mineralogy explorer, not because LADEE is on the surface, but because during solar storms surface atoms are blasted up to LADEE," said Farrell.

The moon is not the only heavenly body affected by the dense CME driver gas. Space scientists have long been aware that these solar storms dramatically affect the Earth’s magnetic field and are responsible for intense aurora (Northern and Southern Lights).

While certain areas of the Martian surface are magnetized, Mars does not have a magnetic field that surrounds the entire planet. Therefore, CME gases have a direct path to sputter and erode that planet’s upper atmosphere. In late 2013, NASA will launch the Mars Atmosphere and Volatile Evolution (MAVEN) mission that will orbit the Red Planet to investigate exactly how solar activity, including CMEs, removes the atmosphere.

On exposed small bodies like asteroids, the dense, fast-streaming CME gas should create a sputtered-enhanced exosphere about the object, similar to that expected at the Moon.

Papers on different aspects of the CME impact simulation are being written and will appear in the special issue of the Journal of Geophysical Research Planets. The team’s research will also be presented December 5 during the fall meeting of the American Geophysical Union in San Francisco.

For more information about the DREAM team visit:

NLSI is a virtual organization that enables collaborative, interdisciplinary research in support of NASA lunar science programs. The institute uses technology to bring scientists together from around the world and is comprised of competitively selected U.S. teams and several international partners. NASA's Science Mission Directorate and the Human Exploration and Operations Mission Directorate in Washington fund NLSI, which is managed by NASA's Ames Research Center at Moffett Field, Calif.

For more information about the NLSI, visit: