Grow Text SizeShrink Text Size
NASA Researchers: DNA Building Blocks Can Be Made in Space
NASA-funded researchers have evidence that some building blocks of DNA, the molecule that carries the genetic instructions for life, found in meteorites were likely created in space. The research gives support to the theory that a "kit" of ready-made parts created in space and delivered to Earth by meteorite and comet impacts assisted the origin of life.

"People have been discovering components of DNA in meteorites since the 1960's, but researchers were unsure whether they were really created in space or if instead they came from contamination by terrestrial life," said Dr. Michael Callahan of NASA's Goddard Space Flight Center, Greenbelt, Md. "For the first time, we have three lines of evidence that together give us confidence these DNA building blocks actually were created in space." Callahan is lead author of a paper on the discovery appearing in Proceedings of the National Academy of Sciences of the United States of America.


The discovery adds to a growing body of evidence that the chemistry inside asteroids and comets is capable of making building blocks of essential biological molecules. For example, previously, these scientists at the Goddard Astrobiology Analytical Laboratory have found amino acids in samples of comet Wild 2 from NASA’s Stardust mission, and in various carbon-rich meteorites. Amino acids are used to make proteins, the workhorse molecules of life, used in everything from structures like hair to enzymes, the catalysts that speed up or regulate chemical reactions.

In the new work, the Goddard team ground up samples of twelve carbon-rich meteorites, nine of which were recovered from Antarctica. They extracted each sample with a solution of formic acid and ran them through a liquid chromatograph, an instrument that separates a mixture of compounds. They further analyzed the samples with a mass spectrometer, which helps determine the chemical structure of compounds. 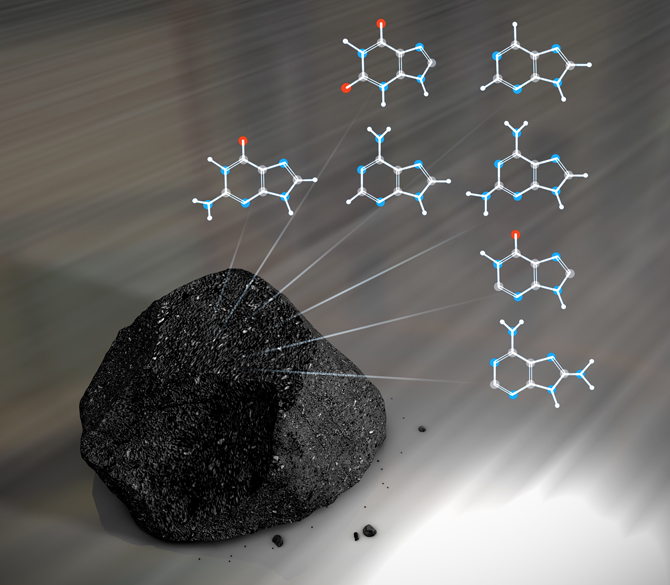 The team found adenine and guanine, which are components of DNA called nucleobases, as well as hypoxanthine and xanthine. DNA resembles a spiral ladder; adenine and guanine connect with two other nucleobases to form the rungs of the ladder. They are part of the code that tells the cellular machinery which proteins to make. Hypoxanthine and xanthine are not found in DNA, but are used in other biological processes.

Also, in two of the meteorites, the team discovered for the first time trace amounts of three molecules related to nucleobases: purine, 2,6-diaminopurine, and 6,8-diaminopurine; the latter two almost never used in biology. These compounds have the same core molecule as nucleobases but with a structure added or removed.

It's these nucleobase-related molecules, called nucleobase analogs, which provide the first piece of evidence that the compounds in the meteorites came from space and not terrestrial contamination. "You would not expect to see these nucleobase analogs if contamination from terrestrial life was the source, because they're not used in biology, aside from one report of 2,6-diaminopurine occurring in a virus (cyanophage S-2L)," said Callahan. "However, if asteroids are behaving like chemical 'factories' cranking out prebiotic material, you would expect them to produce many variants of nucleobases, not just the biological ones, due to the wide variety of ingredients and conditions in each asteroid."

The second piece of evidence involved research to further rule out the possibility of terrestrial contamination as a source of these molecules. The team also analyzed an eight-kilogram (17.64-pound) sample of ice from Antarctica, where most of the meteorites in the study were found, with the same methods used on the meteorites. The amounts of the two nucleobases, plus hypoxanthine and xanthine, found in the ice were much lower -- parts per trillion -- than in the meteorites, where they were generally present at several parts per billion. More significantly, none of the nucleobase analogs were detected in the ice sample. One of the meteorites with nucleobase analog molecules fell in Australia, and the team also analyzed a soil sample collected near the fall site. As with the ice sample, the soil sample had none of the nucleobase analog molecules present in the meteorite.

Thirdly, the team found these nucleobases -- both the biological and non-biological ones -- were produced in a completely non-biological reaction. "In the lab, an identical suite of nucleobases and nucleobase analogs were generated in non-biological chemical reactions containing hydrogen cyanide, ammonia, and water. This provides a plausible mechanism for their synthesis in the asteroid parent bodies, and supports the notion that they are extraterrestrial," says Callahan.

"In fact, there seems to be a 'goldilocks' class of meteorite, the so-called CM2 meteorites, where conditions are just right to make more of these molecules," adds Callahan.