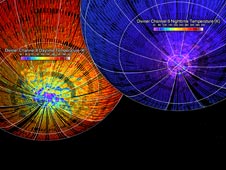 Daytime and nighttime temperature observations of the lunar south pole recorded by the Diviner Radiometer Experiment, one of seven instruments on NASA's Lunar Reconnaissance Orbiter. Image credit: NASA/JPL/UCLA
› Larger view NASA's Lunar Reconnaissance Orbiter, an unmanned mission to comprehensively map the entire moon, has returned its first data. One of the instruments aboard, the Diviner Lunar Radiometer Experiment, is making the first global survey of the temperature of the lunar surface.

Diviner has obtained enough data already to characterize many aspects of the moon's current thermal environment. So far, the instrument has revealed richly detailed thermal behavior throughout the north and south polar regions that extends to the limit of Diviner's spatial resolution of just a few hundred yards.

"Most notable are the measurements of extremely cold temperatures within the permanently shadowed regions of large polar impact craters in the south polar region," said David Paige, UCLA professor of planetary science and principal investigator of the Diviner Lunar Radiometer Experiment. "Diviner has recorded minimum daytime brightness temperatures in portions of these craters of less than -238 degrees Celcius (-397 degrees Fahrenheit). These super-cold brightness temperatures are, to our knowledge, among the lowest that have been measured anywhere in the solar system, including the surface of Pluto."

"After decades of speculation, Diviner has given us the first confirmation that these strange, permanently dark and extremely cold places actually exist on our moon," said science team member Ashwin Vasavada from NASA's Jet Propulsion Laboratory in Pasadena, Calif. "Their presence greatly increases the likelihood that water or other compounds are frozen there. Diviner has lived up to its name."

The Diviner "commissioning phase" observations provide a snapshot in time of current polar temperatures that will evolve with the lunar seasons.

"It is safe to conclude that the temperatures in these super-cold regions are definitely low enough to cold-trap water ice, as well as other more volatile compounds for extended periods," Paige said. "The existence of such cold traps has been predicted theoretically for almost 50 years. Diviner is now providing detailed information regarding their spatial distribution and temperatures."

"Getting a look at the first global thermal maps of the lunar surface is a whole new way of seeing the moon," Paige said.

NASA's Lunar Reconnaissance Orbiter launched on June 18, 2009, carrying Diviner and six other instruments. Diviner has been mapping the moon continuously during the commissioning phase. Since the instrument was first activated on July 5, 2009, it has acquired more than 8 billion calibrated radiometric measurements and has mapped almost 50 percent of the surface area of the moon.

For more information, visit the Diviner's web site at http://diviner.ucla.edu and the Lunar Reconnaissance Orbiter web site: http://lunar.gsfc.nasa.gov/ .
› Back To Top