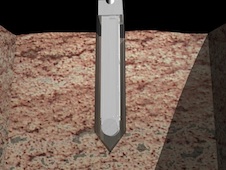 This is an artist's concept of a comet harpoon embedded in a comet. The harpoon tip has been rendered semi-transparent so the sample collection chamber inside can be seen. Credit: NASA/Chris Meaney/Walt Feimer
Full-resolution copy
The best way to grab a sample of a rotating comet that is racing through the inner solar system at up to 150,000 miles per hour while spewing chunks of ice, rock and dust may be to avoid the risky business of landing on it. Instead, researchers want to send a spacecraft to rendezvous with a comet, then fire a harpoon to rapidly acquire samples from specific locations with surgical precision while hovering above the target. Using this "standoff" technique would allow samples to be collected even from areas that are much too rugged or dangerous to permit the landing and safe operation of a spacecraft.

Scientists at NASA's Goddard Space Flight Center in Greenbelt, Md. are in the early stages of working out the best design for a sample-collecting comet harpoon. In a lab the size of a large closet stands a metal ballista (large crossbow) nearly six feet tall, with a bow made from a pair of truck leaf springs and a bow string made of steel cable 1/2 inch thick. The ballista is positioned to fire vertically downward into a bucket of target material. For safety, it's pointed at the floor, because it could potentially launch test harpoon tips about a mile if it was angled upwards. An electric winch mechanically pulls the bow string back to generate a precise level of force, up to 1,000 pounds, firing projectiles to velocities upwards of 100 feet per second.

This is a photo of the ballista testbed preparing to fire a prototype harpoon into a bucket of material that simulates a comet. Credit: NASA/Rob Andreoli
Full-resolution copy
Donald Wegel of NASA Goddard, lead engineer on the project, places a test harpoon in the bolt carrier assembly, steps outside the lab and moves a heavy wooden safety door with a thick plexiglass window over the entrance. After dialing in the desired level of force, he flips a switch and, after a few-second delay, the crossbow fires, launching the projectile into a 55-gallon drum full of cometary simulant -- sand, salt, pebbles or a mixture of each. The ballista produces a uniquely impressive thud upon firing, somewhere between a rifle and a cannon blast.

"We had to bolt it to the floor, because the recoil made the whole testbed jump after every shot," said Wegel. "We're not sure what we'll encounter on the comet – the surface could be soft and fluffy, mostly made up of dust, or it could be ice mixed with pebbles, or even solid rock. Most likely, there will be areas with different compositions, so we need to design a harpoon that's capable of penetrating a reasonable range of materials. The immediate goal though, is to correlate how much energy is required to penetrate different depths in different materials. What harpoon tip geometries penetrate specific materials best? How does the harpoon mass and cross section affect penetration? The ballista allows us to safely collect this data and use it to size the cannon that will be used on the actual mission."

Comets are frozen chunks of ice and dust left over from our solar system's formation. As such, scientists want a closer look at them for clues to the origin of planets and ultimately, ourselves. "One of the most inspiring reasons to go through the trouble and expense of collecting a comet sample is to get a look at the 'primordial ooze' – biomolecules in comets that may have assisted the origin of life," says Wegel.

Scientists at the Goddard Astrobiology Analytical Laboratory have found amino acids in samples of comet Wild 2 from NASA’s Stardust mission, and in various carbon-rich meteorites. Amino acids are the building blocks of proteins, the workhorse molecules of life, used in everything from structures like hair to enzymes, the catalysts that speed up or regulate chemical reactions. The research gives support to the theory that a "kit" of ready-made parts created in space and delivered to Earth by meteorite and comet impacts gave a boost to the origin of life.

Although ancient comet impacts could have helped create life, a present-day hit near a populated region would be highly destructive, as a comet's large mass and high velocity would make it explode with many times the force of a typical nuclear bomb. One plan to deal with a comet headed towards Earth is to deflect it with a large – probably nuclear – explosion. However, that might turn out to be a really bad idea. Depending on the comet's composition, such an explosion might just fragment it into many smaller pieces, with most still headed our way. It would be like getting hit with a shotgun blast instead of a rifle bullet. So the second major reason to sample comets is to characterize the impact threat, according to Wegel. We need to understand how they're made so we can come up with the best way to deflect them should any have their sights on us.

"Bringing back a comet sample will also let us analyze it with advanced instruments that won't fit on a spacecraft or haven't been invented yet," adds Dr. Joseph Nuth, a comet expert at NASA Goddard and lead scientist on the project.

Of course, there are other ways to gather a sample, like using a drill. However, any mission to a comet has to overcome the challenge of operating in very low gravity. Comets are small compared to planets, typically just a few miles across, so their gravity is correspondingly weak, maybe a millionth that of Earth, according to Nuth. "A spacecraft wouldn't actually land on a comet; it would have to attach itself somehow, probably with some kind of harpoon. So we figured if you have to use a harpoon anyway, you might as well get it to collect your sample," says Nuth. 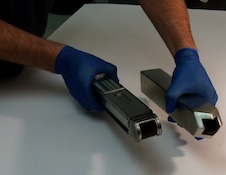 This is a photo of a prototype harpoon tip (right) and sample collection chamber (left). Credit: NASA/Rob Andreoli
Full-resolution copy
Right now, the team is working out the best tip design, cross-section, and explosive powder charge for the harpoon, using the crossbow to fire tips at various speeds into different materials like sand, ice, and rock salt. They are also developing a sample collection chamber to fit inside the hollow tip. "It has to remain reliably open as the tip penetrates the comet's surface, but then it has to close tightly and detach from the tip so the sample can be pulled back into the spacecraft," says Wegel. "Finding the best design that will package into a very small cross section and successfully collect a sample from the range of possible materials we may encounter is an enormous challenge."

"You can't do this by crunching numbers in a computer, because nobody has done it before -- the data doesn't exist yet," says Nuth. "We need to get data from experiments like this before we can build a computer model. We're working on answers to the most basic questions, like how much powder charge do you need so your harpoon doesn't bounce off or go all the way through the comet. We want to prove the harpoon can penetrate deep enough, collect a sample, decouple from the tip, and retract the sample collection device."

The spacecraft will probably have multiple sample collection harpoons with a variety of powder charges to handle areas on a comet with different compositions, according to the team. After they have finished their proof-of-concept work, they plan to apply for funding to develop an actual instrument. "Since instrument development is more expensive, we need to show it works first," says Nuth.

This is a demonstration of the sample collection chamber. Credit: NASA/Rob Andreoli
Full-resolution copy
Currently, the European Space Agency is sending a mission called Rosetta that will use a harpoon to grapple a probe named Philae to the surface of comet "67P/Churyumov-Gerasimenko" in 2014 so that a suite of instruments can analyze the regolith. "The Rosetta harpoon is an ingenious design, but it does not collect a sample," says Wegel. "We will piggyback on their work and take it a step further to include a sample-collecting cartridge. It's important to understand the complex internal friction encountered by a hollow, core-sampling harpoon."

NASA's recently-funded mission to return a sample from an asteroid, called OSIRIS-REx (Origins, Spectral Interpretation, Resource Identification, Security -- Regolith Explorer), will gather surface material using a specialized collector. However, the surface can be altered by the harsh environment of space. "The next step is to return a sample from the subsurface because it contains the most primitive and pristine material," said Wegel.

Both Rosetta and OSIRIS-REx will significantly increase our ability to navigate to, rendezvous with, and locate specific interesting regions on these foreign bodies. The fundamental research on harpoon-based sample retrieval by Wegel and his team is necessary so the technology is available in time for a subsurface sample return mission.

The team includes Wegel and Nuth of NASA Goddard as well as Javier Bernal, a student intern from the University of Puerto Rico at Mayaguez. The work was initially funded by Goddard's Internal Research and Development program, and sustained by NASA's Science and Engineering Collaboration, the Undergraduate Student Researcher Program, and Universities Space Research Programs.