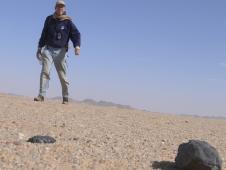 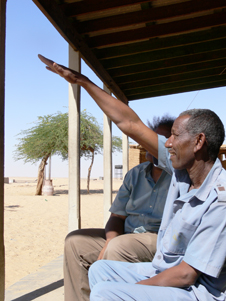 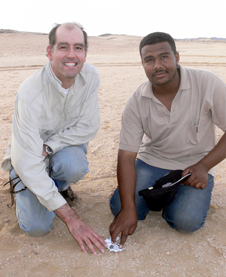 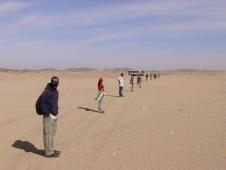 Students and staff of the University of Khartoum comb the Nubian Desert looking for meteorites, in a line more than half a mile long. Credit: NASA / SETI / P. Jenniskens 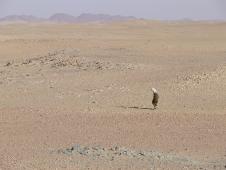 A student from the University of Khartoum searches the rocky desert terrain for meteorites. Credit: NASA / SETI / P. Jenniskens Just before dawn on Oct. 7, 2008, an SUV-sized asteroid entered Earth's atmosphere and exploded harmlessly over the Nubian Desert of northern Sudan. Scientists expected the asteroid, called 2008 TC3, had blown to dust in the resulting high-altitude fireball.

What happened next excited the scientific community.

Peter Jenniskens, a meteor astronomer with the SETI Institute in Mountain View, Calif., who works at NASA's Ames Research Center in Moffett Field, Calif., joined Muawia Shaddad of the University of Khartoum in Sudan to search for possible extraterrestrial remnants from the asteroid. A paper, featured as the cover story in the March 26 issue of the journal Nature documents their efforts.

Now, for the first time, scientists are studying recovered celestial meteorites that have a definitive link with an asteroid from space. This presents the science community an unprecedented opportunity to interpret asteroid data and learn more about the origins and differentiations between asteroids and may provide better answers about the formation of our solar system.

The asteroid was discovered by a telescope of the NASA-sponsored Catalina Sky Survey. Astronomers and scientists around the world tracked and scanned TC3 for 20 hours prior to its demise. This marked the first time a celestial object was located prior to entering Earth's atmosphere. The asteroid had a velocity of 27,700 miles per hour when it entered the atmosphere. It created a fiery trail 51 miles long before exploding 121,000 feet from the ground.

"When Dr. Shaddad and I first arrived and started interviewing eyewitnesses, things looked very bleak," said Jenniskens. "They all described an immense explosion in the sky, but none had seen any material flying out of the fireball."

The location and subsequent recovery was like searching for a needle in a haystack. Scientists used what they referred to as a treasure map to locate the meteorites. NASA's Jet Propulsion Laboratory, or JPL, in Pasadena, Calif., produced a chart that gave the recovery team its search grid and specific target area.

"My work usually begins and ends with trajectories of objects in space," said Steve Chesley, a scientist at NASA's Near-Earth Object Program Office at JPL. "We had accurately predicted when and where TC3 would enter over the Sudan. Jenniskens was asking for a map of where any surviving fireball fragments could have landed. That was a first for the Near-Earth Object Program Office."

Armed with the treasure map, Jenniskens, Shaddad and students and staff from the University of Khartoum began their trek in the afternoon of Dec. 6, 2008. After a three-day search, the team had scoured 18 miles along Chesley's asteroid path and recovered 15 samples with a total mass 1.24 pounds. Scientists observed the meteorites to be porous, rocky material, rounded like a pebble, with a broken face, and very black in color.

Jenniskens and the Khartoum team visited the site on two more occasions and collected 280 meteorites with a total mass of approximately 11 pounds. Samples were sent for analysis to Ames, NASA's Johnson Space Center in Houston, the Carnegie Institution of Washington, and Fordham University in New York.

"We certainly found a treasure," said Michael Zolensky, a cosmic mineralogist at Johnson. "We have never seen a meteorite on Earth exactly like this one because they are so fragile that they explode high in the atmosphere. The samples appear to have originated from the surface of the original asteroid, making them especially valuable to planetologists explaining the geological history of primitive bodies and planning spacecraft missions to asteroids." By measuring how asteroid 2008TC3 reflected sunlight in space and comparing it to how the meteorites found on the ground reflected sunlight, the team concluded that the meteorites came from the surface of an F-class asteroid in our solar system's asteroid belt. Furthermore, the team determined that the meteorite was what astronomers refer to as a polymic ureilite, in other words, a very rare and unusually fragile, dark rock.

Asteroid 2008TC3 was relatively small to most objects detected and tracked by Spaceguard. Scientists estimate asteroids of its size enter Earth's atmosphere approximately once a year, but meteorites rarely survive once they land because of weather and water damage as well as human disturbance. Scientists are astounded at the good luck that not only did the meteorites land in a part of the world with ideal conditions to preserve such cosmic artifacts, but the observatories on the ground were able to detect and track the asteroid's entry.

"It's very important to understand the physics of these objects," said S. Pete Worden, Ames Center Director and co-author of the Nature paper. "In most cases using a space ship to change the path of an asteroid to avoid a collision with Earth would be more effective than trying to destroy it."

For more images from 2008TC4 detection and recovery effort, visit: