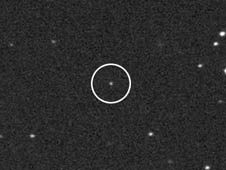 Video imaging of newly discovered asteroid 2011 GP59 shows the object appearing to blink on and off about once every four minutes.

Amateur astronomers, including Nick James of Chelmsford, Essex, England, have captured video of the interesting object. James generated this video of GP59 on the night of Monday, April 11. The video, captured with an 11-inch Schmidt-Cassegrain telescope, is a compilation of 137 individual frames, each requiring 30 seconds of exposure. At the time, the asteroid was approximately 3,356,000 kilometers (2,081,000 mile) distant. Since then, the space rock has become something of a darling of the amateur astronomy community, with many videos available. (Here is one recent posting: http://www.youtube.com/watch?v=O7wsAZNr56E )

"Usually, when we see an asteroid strobe on and off like that, it means that the body is elongated and we are viewing it broadside along its long axis first, and then on its narrow end as it rotates ," said Don Yeomans, manager of NASA's Near-Earth Object Program Office at the Jet Propulsion Laboratory in Pasadena, Calif. "GP59 is approximately 50 meters [240 feet] long, and we think its period of rotation is about seven-and-a-half minutes. This makes the object's brightness change every four minutes or so."

"Although newly discovered, the near-term orbital location of asteroid 2011 GP59 can be accurately plotted," said Yeomans. "There is no possibility of the small space rock entering Earth's atmosphere during this pass or for the foreseeable future."