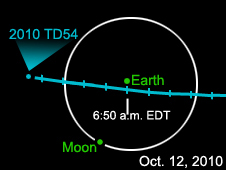 PASADENA, Calif. – A small asteroid will fly past Earth early Tuesday within the Earth-moon system. The asteroid, 2010 TD54, will have its closest approach to Earth’s surface at an altitude of about 45,000 kilometers (27,960 miles) at 6:50 EDT a.m. (3:50 a.m. PDT). At that time, the asteroid will be over southeastern Asia in the vicinity of Singapore. During its flyby, Asteroid 2010 TD54 has zero probability of impacting Earth. A telescope of the NASA-sponsored Catalina Sky Survey north of Tucson, Arizona discovered 2010 TD54 on Oct. 9 at (12:55 a.m. PDT) during routine monitoring of the skies.

2010 TD54 is estimated to be about 5 to 10 meters (16 to 33 feet) wide. Due to its small size, the asteroid would require a telescope of moderate size to be viewed. A five-meter-sized near-Earth asteroid from the undiscovered population of about 30 million would be expected to pass daily within a lunar distance, and one might strike Earth's atmosphere about every 2 years on average. If an asteroid of the size of 2010 TD54 were to enter Earth’s atmosphere, it would be expected to burn up high in the atmosphere and cause no damage to Earth’s surface.