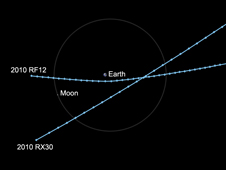 Top view: Two small asteroids in unrelated orbits will pass within the moon's distance of Earth on Wed. Both should be observable with moderate-sized amateur telescopes. Image credit: NASA/JPL-Caltech
› Larger view

PASADENA, Calif. – Two asteroids, several meters in diameter and in unrelated orbits, will pass within the moon's distance of Earth on Wednesday, Sept. 8.

Both asteroids should be observable near closest approach to Earth with moderate-sized amateur telescopes. Neither of these objects has a chance of hitting Earth. A 10-meter-sized near-Earth asteroid from the undiscovered population of about 50 million would be expected to pass almost daily within a lunar distance, and one might strike Earth's atmosphere about every 10 years on average.

The Catalina Sky Survey near Tucson, Ariz., discovered both objects on the morning of Sunday, Sept. 5, during a routine monitoring of the skies. The Minor Planet Center in Cambridge, Mass., first received the observations Sunday morning, determined preliminary orbits and concluded that both objects would pass within the distance of the moon about three days after their discovery.