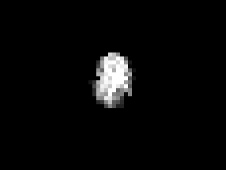 This radar image of 2007 TU24 was obtained on January 28, 2008, about 12 hours before the asteroid's 1.4-lunar-distance pass by the Earth. The Arecibo Observatory in Puerto Rico and the Greenbank Telescope in West Virginia were used to take this image.
›  Full view (22Kb)
›  For media: Broadcast quality video and audio clips
As expected, Asteroid 2007 TU24 made its closest approach to Earth at 3:33 a.m. today, Jan. 29 (12:33 a.m. Pacific time), and is now headed away from our planet. At its closest point, the asteroid was 554,209 kilometers (344,370 miles) from Earth, or roughly 1.4 times the distance between the moon and Earth.

Scientists at NASA's Jet Propulsion Laboratory in Pasadena, Calif. had tracked the asteroid in advance and determined that there was no possibility of an impact. The rare close approach is providing a bonanza for scientists, who plan to scrutinize images and data gathered in hopes of learning more about our solar system's closest neighbors - near-Earth asteroids. More observations are planned for Feb. 1 through 4 using the Arecibo Observatory in Puerto Rico. The observatory is operated by Cornell University, Ithaca, N.Y., for the National Science Foundation.