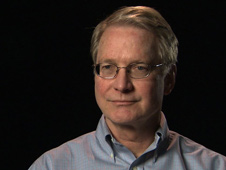 The scientists have determined that there is no possibility of an impact with Earth in the foreseeable future.

During this close approach, amateur astronomers with apertures of at least three inches should be able to see the asteroid as a dot on the sky.

CUT 1 - DONALD YEOMANS, MANAGER OF NASA'S NEAR-EARTH OBJECT PROGRAM OFFICE AT THE JET PROPULSION LABORATORY WANTS PEOPLE TO KNOW THAT THIS ASTEROID IS NOT A THREAT TO EARTH.
›  Play audio
›  Play video (4.7Mb)
›  High Definition (80Mb | Screen size: 1280x720)
Running time: :20
Out: "this close."
Transcript: "There have been some notices on the Internet that have been very incorrect and very misleading. We've pointed out time and time again, that the object is not a threat. It cannot approach the Earth in a threatening manner. It's simply a magnificent scientific opportunity to observe an asteroid this size, this close."

CUT 2 - DONALD YEOMANS SAYS YOU MIGHT CATCH A GLIMPSE OF THE ASTEROID -- IF YOU HAVE THE RIGHT EQUIPMENT.
›  Play audio
›  Play video (3.2Mb)
›  High Definition (45Mb | Screen size: 1280x720)
Running time: :14
OUT: "clear skies."
Transcript: "It's going to be 10th magnitude, which is about 50 times fainter than you can see with the naked eye, but if amateur astronomers have a smallish telescope, three inches in aperture or larger, they can observe it, if they have clear skies."

CUT 3 - DONALD YEOMANS DESCRIBES HOW NASA DETECTS, DISCOVERS AND TRACKS THESE OBJECTS
OUT: "something about."
Transcript: "NASA is doing their part by running four full-time observatory campaigns to detect, discover and track these objects, so it's one of the few natural disasters we can do something about."
›  Play video (3.2Mb)
›  High Definition (45Mb | Screen size: 1280x720)
No audio available