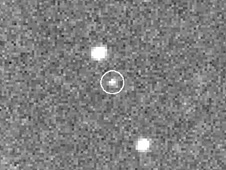 Asteroid 2007 TU24 was discovered by the NASA-sponsored Catalina Sky Survey on Oct. 11, 2007. Scientists at NASA's Near-Earth Object Program Office at the Jet Propulsion Laboratory in Pasadena, Calif., have determined that there is no possibility of an impact with Earth in the foreseeable future.

"This will be the closest approach by a known asteroid of this size or larger until 2027," said Don Yeomans, manager of the Near Earth Object Program Office at JPL. "As its closest approach is about one-and-a-half times the distance of Earth to the moon, there is no reason for concern. On the contrary, Mother Nature is providing us an excellent opportunity to perform scientific observations." 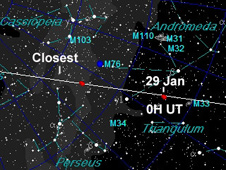 The illustration from an amateur astronomer shows the asteroid's track on the sky for 3 days near the time of the close Earth approach as seen from the city of Philadelphia. Image courtesy: Dr. Dale Ireland, Silverdale, WA.
›  Larger view Asteroid 2007 TU24 will reach an approximate apparent magnitude 10.3 on Jan. 29-30 before quickly becoming fainter as it moves farther from Earth. On that night, the asteroid will be observable in dark and clear skies through amateur telescopes with apertures of at least 7.6 centimeters (3 inches). An object with a magnitude of 10.3 is about 50 times fainter than an object just visible to the naked eye in a clear, dark sky.

NASA detects and tracks asteroids and comets passing close to Earth. The Near Earth Object Observation Program, commonly called "Spaceguard," discovers, characterizes and computes trajectories for these objects to determine if any could be potentially hazardous to our planet.