Grow Text SizeShrink Text Size
NASA's Goddard, Glenn Centers Look to Lift Space Astronomy out of the Fog
A fogbank is the least useful location for a telescope, yet today's space observatories effectively operate inside one. That's because Venus, Earth and Mars orbit within a vast dust cloud produced by comets and occasional collisions among asteroids. After the sun, this so-called zodiacal cloud is the solar system's most luminous feature, and its light has interfered with infrared, optical and ultraviolet observations made by every astronomical space mission to date.

"To put it simply, it has never been night for space astronomers," said Matthew Greenhouse, an astrophysicist at NASA's Goddard Space Flight Center in Greenbelt, Md. Light from zodiacal dust can be a thousand times brighter than the sources astronomers actually target, limiting sensitivity in much the same way that bright moonlight hampers ground-based observatories. The dust and its unwanted illumination are greatest in the plane of Earth's orbit, the same plane in which every space telescope operates.

Placing future astronomy missions on more tilted orbits would let spacecraft spend significant amounts of time above and below the thickest dust and thereby reduce its impact on observations. So Greenhouse teamed with Scott Benson at NASA's Glenn Research Center in Cleveland, Ohio, to investigate how these "dark sky" or extra-zodiacal orbits might improve mission science and to develop a means of cost-effectively reaching them.

"Just by placing a space telescope on these inclined orbits, we can improve its sensitivity by a factor of two in the near-ultraviolet and by 13 times in the infrared," Greenhouse explained. "That's a breakthrough in science capability with absolutely no increase in the size of the telescope's mirror." 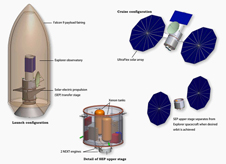 The Extra-Zodiacal Explorer (EZE) mission concept includes launch on a Falcon 9 rocket and a new solar-electric-propulsion upper stage that will enable realization of joint goals for NASA's Office of the Chief Technologist and Science Mission Directorate, with wide applicability across astrophysics and planetary science disciplines. The transfer stage would use NEXT ion engines powered by disk-shaped UltraFlex solar panels. (Image credit: NASA Goddard)
› Larger image

Greenhouse, Benson and the COllaborative Modeling and Parametric Assessment of Space Systems (COMPASS) study team at NASA Glenn designed a mission that utilizes new developments in solar arrays, electric propulsion and lower-cost expendable launch vehicles. Their proof-of-concept mission is the Extra-Zodiacal Explorer (EZE), a 1,500-pound EX-class observatory that could accommodate a telescope in the size range of the recently completed WISE mission — all within the cost and schedule constraints of NASA’s Explorer Program.

Launched on a SpaceX Falcon 9 rocket, EZE would use a powerful new solar-electric drive as an upper stage to direct the spacecraft on a gravity-assist maneuver past Earth or Mars. This flyby would redirect the mission into an orbit inclined by as much as 30 degrees to Earth's.

The result, the scientists say, will be the highest-performance observatory ever achieved in the decades-long history of NASA's Explorer program.

"We see EZE as a game-changer, the first step on a new path for NASA Explorers that will yield major science goals despite limited resources," said Benson, who previously managed the new electric propulsion technology project.

Named NASA’s Evolutionary Xenon Thruster (NEXT), the engine is an improved type of ion drive. Using electric power supplied by solar panels, the NEXT engines operate by removing electrons from atoms of xenon gas, then accelerating the charged ions through an electric field to create thrust. While these types of engine provide much less thrust at any given time than traditional chemical rockets, they are much more fuel efficient and can operate for years. 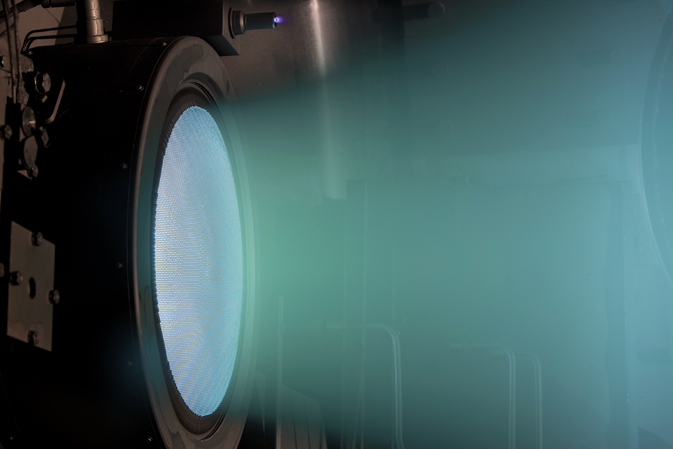 A NEXT engine fires at full power in a test chamber at NASA's Glenn Research Center. At the time the image was taken, in December 2009, the thruster had operated continuously for more than 25,000 hours; it has now run for more than 40,000 hours. (Image credit: NASA Glenn)
› Larger image

Built by Aerojet, an aerospace company based in Sacramento, Calif., each 6.9-kilowatt NEXT engine delivers two and a half times the thrust of the NSTAR ion engines now flying on NASA's Dawn spacecraft.

"We've run one NEXT thruster for over 40,000 hours in ground testing, more than twice the thruster operating lifetime needed to deliver the EZE spacecraft to its extra-zodiacal orbit,” Benson explained. "This is mature technology that will enable much more cost-effective space missions across both the astrophysics and planetary science disciplines."


"Development of this solar-electric upper stage for Falcon 9, which the Goddard/Glenn EZE team is advocating, will make extra-zodiacal orbits available to any astronomer proposing to NASA's Explorer program. This will enable unprecedented science capability for astrophysics Explorers," Greenhouse said.

The EZE upper stage would carry two NEXT engines, their xenon gas propellant and two 18-foot-wide UltraFlex solar arrays built by Alliant Techsystems in Goleta, Calif. These arrays, which were originally developed for NASA's Orion Crew Exploration Vehicle, would see their first deep-space application with EZE. Once the spacecraft achieves the desired orbit, the transfer stage would separate and the science mission would begin. 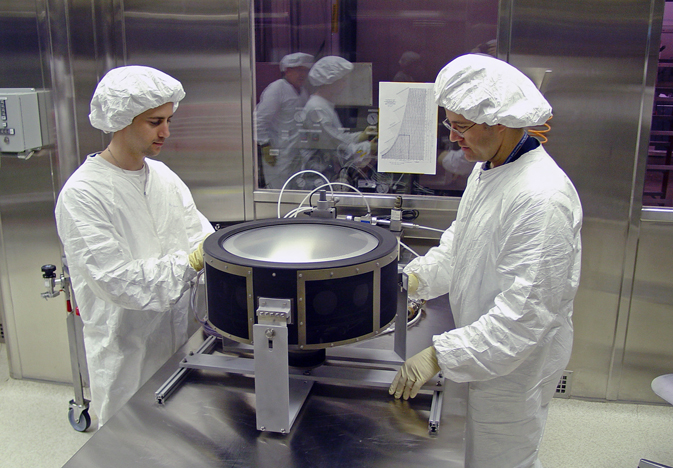 The Goddard/Glenn study also showed that the EZE mission concept could be the lowest-cost option for a planned flight demonstration of a high-power solar-electric propulsion stage. A standardized solar-electric upper stage for the Falcon 9 that can be used by any mission will set the small-payload Explorer program on a new path to achieve science goals that rival the capability of larger, more expensive systems.