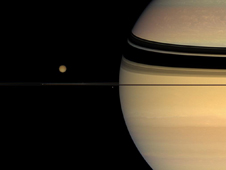 Click image for full-resolution.
Many Colors, Many Moons
Four moons huddle near Saturn's multi-hued disk. Giant Titan, with its darker winter hemisphere, dominates the smaller moons in the scene. This view looks toward the unilluminated side of the rings.
Image credit: NASA/JPL/Space Science Institute

Click image for full-resolution.
Volcano Impostors
These two images are computer simulation models of landform evolution that demonstrate how over time rain can carve landscapes into formations that look like aspects of volcanoes. The left image shows an un-eroded rolling cratered surface. The right image shows what those same rolling craters would look like after many millennia of erosion caused by rain.
Image Copyright A. Howard

Click image for full-resolution.
Tortula Facula
These images obtained by NASA’s Cassini spacecraft show the feature named Tortola Facula on Saturn's moon Titan. The left image was obtained by the visual and infrared mapping spectrometer data on Oct. 26, 2004. In 2005, scientists interpreted Tortola Facula as an ice volcano. The right image shows the same feature, as seen by Cassini’s radar instrument on May 12, 2008, at a much higher resolution. Scientists now think that this feature is a non-descript obstacle surrounded by obvious wind-blown sand dunes, similar to those commonly found in this region of Titan.
Image credit: NASA/JPL/University of Arizona

Click image for full-resolution.
Xanadu and Callisto
These images compare surface features observed by NASA's Cassini spacecraft at the Xanadu region on Saturn's moon Titan (left), and features observed by NASA’s Galileo spacecraft on Jupiter's cratered moon Callisto (right). Titan may originally have had a cratered landscape similar to Callisto that has since been eroded by rainfall and runoff. There are many large circular features in Titan's Xanadu region that have some of the characteristics of impact craters – such as central peaks and inward facing circular cliffs – which make scientists think they are, in fact, eroded impact craters. The surface of Callisto also has a substantially eroded cratered landscape. Instead of erosion by weather, scientists theorize the erosion on Callisto was caused by ground ice evaporating away.
Image credit: NASA/JPL
Have the surface and belly of Saturn's smog-shrouded moon, Titan, recently simmered like a chilly, bubbling cauldron with ice volcanoes, or has this distant moon gone dead? In a newly published analysis, a pair of NASA scientists analyzing data collected by the Cassini spacecraft suggest Titan may be much less geologically active than some scientists think.

In the paper, published in the April 2011 edition of the journal Icarus, scientists conclude Titan's interior may be cool and dormant and incapable of causing active ice volcanoes.

"It would be fantastic to find strong evidence that clearly shows Titan has an internal heat source that causes ice volcanoes and lava flows to form," said Jeff Moore, lead author of the paper and a planetary scientist at NASA's Ames Research Center, Moffett Field, Calif. "But we find that the evidence presented to date is unconvincing, and recent studies of Titan’s interior conducted by geophysicists and gravity experts also weaken the possibility of volcanoes there."

Scientists agree that Titan shows evidence of having lakes of liquid methane and ethane, and valleys carved by these exotic liquids, as well as impact craters. However, a debate continues to brew about how to interpret the Cassini data about Titan. Some scientists theorize ice volcanoes exist and suggest energy from an internal heat source may have caused ice to rise and release methane vapors as it reached Titan’s surface.

But in the new paper, the authors conclude that the only features on Titan’s surface that have been unambiguously identified were created by external forces – such as objects hitting the surface and creating craters, wind and rain pummeling its surface, and the formation of rivers and lakes.

"Titan is a fascinating world," said Robert Pappalardo, a research scientist at NASA's Jet Propulsion Laboratory, Pasadena, Calif., and former Cassini project scientist. "Its uniqueness comes from its atmosphere and organic lakes, but in this study, we find no strong evidence for icy volcanism on Titan."

In December 2010, a group of Cassini scientists presented new topographic data on an area of Titan called Sotra Facula, which they think makes the best case yet for a possible volcanic mountain that once erupted ice on Titan. Although Moore and Pappalardo do not explicitly consider this recent topographic analysis in their paper, they do not find the recent analysis of Sotra Facula to be convincing so far. It remains to be seen whether ongoing analyses of Sotra Facula can change minds.

Titan, Saturn's largest moon, is the only known moon to have a dense atmosphere, composed primarily of nitrogen, with two to three percent methane. One goal of the Cassini mission is to find an explanation for what, if anything, might be maintaining this atmosphere.

Titan's dense atmosphere makes its surface very difficult to study with visible-light cameras, but infrared instruments and radar signals can peer through the haze and provide information about both the composition and shape of the surface.

"Titan is most akin to Jupiter's moon Callisto, if Callisto had weather," Moore added. "Every feature we have seen on Titan can be explained by wind, rain, and meteorite impacts, rather than from internal heating."

Callisto is almost the exact same size as Titan. It has a cratered appearance and because of its cool interior, its surface features are not affected by internal forces. Moore and Pappalardo conclude that Titan also may have a cool interior, with only external processes like wind, rain and impacts shaping its surface."

The Cassini spacecraft, currently orbiting Saturn, continues to make fly-bys of Titan. Scientists will continue to explore Titan's mysteries, including investigations of the changes in the landscapes.

The Cassini-Huygens mission is a cooperative project of NASA, the European Space Agency and the Italian Space Agency. JPL, a division of the California Institute of Technology in Pasadena, manages the mission for NASA's Science Mission Directorate, Washington. The Cassini orbiter and several of its instruments were designed, developed and assembled at JPL.

For more information about the Cassini-Huygens mission, visit: