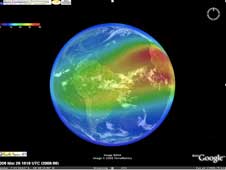 A screenshot of the 4D Ionosphere. Red denotes regions of high electron density where radio communications can be limited to few or no frequencies. Credit: Google
> Click for larger image
> Click for a "how to" video of this exciting new modeling system.
> Download the video
Today, NASA-funded researchers have released to the general public a new “4D” live model of Earth’s ionosphere. Without leaving home, anyone can fly through the dynamic layer of ionized gases that encircles Earth at edge of space itself. All that’s required is a connection to the Internet.

“This is an exciting development,” says solar physicist Lika Guhathakurta of NASA headquarters in Washington, DC. “The ionosphere is important to pilots, ham radio operators, earth scientists and even soldiers. Using this new 4D tool, they can monitor and study the ionosphere as if they’re actually inside it.”

“The best way to appreciate the 4D ionosphere is to try it,” says W. Kent Tobiska, president of Space Environment Technologies and chief scientist of its Space Weather Division. He offers these instructions:

“Two, visit our web site http://terra1.spacenvironment.net/~ionops/ES4Dintro.html and click on the link "Total Electron Content" found on the top navigation bar.”

Wait for the file to load and voila—you’re flying through the ionosphere."

“Colors represent electron content,” he explains. “Bright red is high density; that’s where radio communications are restricted to few or no frequencies. Blue denotes low density; no problem there.”

Using the intuitive Google Earth interface, users can fly above, around and through these regions getting a true 3D view of the situation. Make that 4D. “The fourth dimension is time. This is a real-time system updated every 10 minutes,” he says.

The ionosphere is, in a sense, our planet’s “final frontier.” It is the last wisp of Earth that astronauts leave behind when they enter space. The realm of the ionosphere stretches from 50 to 500 miles above Earth’s surface where the atmosphere thins to near-vacuum and exposes itself to the fury of the sun. Solar ultraviolet radiation breaks apart molecules and atoms creating a globe-straddling haze of electrons and ions.

Ham radio operators know the ionosphere well. They can communicate over the horizon by bouncing their signals off of the ionosphere—or communicate not at all when a solar flare blasts the ionosphere with X-rays and triggers a radio blackout. The ionosphere also has a big impact on GPS reception. Before a GPS satellite signal reaches the ground, it must first pass through ionospheric gases that bend, reflect and attenuate radio waves. Solar and geomagnetic storms that unsettle the ionosphere can cause position errors as large as 100 meters. Imagine a pilot flying on instruments descending toward a landing strip only to discover it is a football field to the right.

“Understanding the ionosphere is clearly important. That’s why NASA’s Living with a Star (LWS) program funded this work,” says Guhathakurta. Space Environment Technologies, Inc. of California received the LWS grant and they partnered with Space Environment Corp. of Utah and the US Air Force to develop the 4D ionosphere.

The 4D model can be fun and even a little addictive, warns Tobiska, who likes to use it to pilot an imaginary plane over the Arctic. “A growing number of commercial business flights are crossing the Arctic Circle,” he says. “It’s the shortest distance between, say, Chicago and Beijing and many other major cities.”

The ionosphere is particularly important to these lucrative flights. While they are over the Arctic, planes lose contact with most geosynchronous satellites and must rely on “old-fashioned” radio communications—a link that could be severed during a radio blackout. Using the 4D model, a flight controller could examine the ionosphere from the flyer’s point of view and use that information to anticipate problems that could cause a flight to be delayed or diverted.

The proper name of the system is CAPS, short for Communication Alert and Prediction System. Earth-orbiting satellites feed the system up-to-the-minute information on solar activity; the measurements are then converted to electron densities by physics-based computer codes. It is important to note, says Tobiska, that CAPS reveals the ionosphere not only as it is now, but also as it is going to be the near future. “Forecasting is a key aspect of CAPS available to our customers from, e.g., the Dept. of Defense and the airline industry.”

Start your own flight at > http://terra1.spacenvironment.net/~ionops/ES4Dintro.html