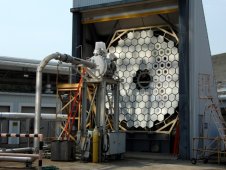 The Solar Thermal Test Facility's concentrator mirror is composed of 144 smaller hexagonal segments. When all the mirrors are fully uncovered, the mirror beams about 1,000,000 watts per square meter of solar energy intensity into the vacuum chamber at the focal point. (NASA/D. Oliver) 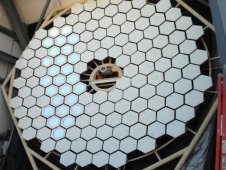 The instrument currently being tested only needs 14,700 watts per square meter intensity so the facility covers most of the mirrors, or those that appear white, only uncovering a few with holes, those that look glassy, to beam sunlight into the vacuum chamber. Normal solar intensity at the Marshall Center with no mirrors is 1000 watts per square meter. (NASA/D. Oliver) 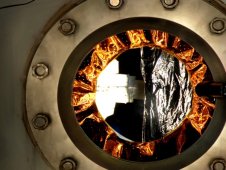 Engineers put the instrument inside this vacuum chamber where the pressure is lowered to the vacuum conditions of space. The black liquid nitrogen cooled walls simulate the super-cold conditions space has to offer. The sun is illuminating the front of the instrument bright white. (NASA/D. Oliver) In the hostile environment of space, satellites could get burned by the ultra-hot sun in front of them and chilled by the frigid cold conditions of space behind them.

Researchers at NASA's Marshall Space Flight Center in Huntsville, Ala., are using their Solar Thermal Test Facility to simulate some of the harshest conditions space has to offer to learn what these extreme temperatures can do to flight hardware close to the sun. They're currently testing Strofio, a unique NASA instrument that will fly aboard an upcoming European Space Agency mission, in this facility to test the thermal balance before the instrument is on its way to Mercury.

The facility looks like it belongs in a galaxy far, far away. A two-story tall curved mirror -- actually is made of 144 separate mirror segments, each hexagonally shaped and about 18 inches in diameter -- forms the backbone of the facility.

About 50 yards away, sitting in a field, lies another mirror tilted at a slight angle. This secondary mirror reflects the sun towards the primary mirror, which captures the energy and then focuses inside a small vacuum chamber mounted in front of the mirror’s focal point.

The giant wall of mirrors works by capturing the light from the sun and redirecting that energy to whatever happens to be sitting in the vacuum chamber. That superheats the instrument, allowing scientists to know how their hardware will behave as it nears the sun. Of course they can't use all 144 mirror segments at once -- that would beam 5000 watts worth of energy onto whatever happens to be inside the vacuum chamber. For the Strofio tests, engineers will only need to partially uncover about 26 mirror segments. They'll reach temperatures hot enough to test their instrument, but not so high that they melt away their hard work.

In the front, the mirrors expose the instrument to the hotness of the sun. In the back, the nitrogen exposes it to the coldness of a vacuum. Together they accurately mimic the conditions of space, allowing scientists to test how their instrument will perform on its actual mission.

"It really gives you a good opportunity to understand how your instrument will perform in the conditions of deep space," says Dr. Jimmy Lee, mission manager for Strofio. "We're trying to understand on Earth how our tool will perform thousands of miles away in radically different conditions. That’s critical for a mission like ours."

These tests prove vital for equipment like Stofio that are destined to travel close to the sun. Strofio will fly in polar orbit around Mercury where it will determine the chemical composition of Mercury's surface using a technique called mass spectroscopy, providing a powerful new data to study the planet's geological history. It will launch with the ESA's Mercury Planetary Orbiter mission in 2014.

When Strofio reaches its orbit around mercury, the sun will expose it to temperatures over 120 degrees Celsius or 248 Fahrenheit. That's a stretch even for the relatively resilient NASA computers which historically only operate at around 24 degrees Celsius or 75 Fahrenheit. Engineers will have to continuously test Strofio to handle the tough Mercury conditions.

For now, the Solar Thermal Test Facility's team continues to test Strofio in preparation for its upcoming mission. Hopefully, they'll continue to have the opportunity to bring the conditions of deep space to the middle of Huntsville, Ala.