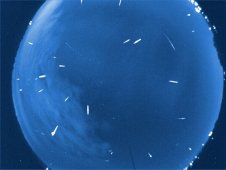 An unexpected flock of fireballs burst over the eastern United States early Sept. 9, but sharp-eyed Marshall Center astronomers were on the case. Lasting almost four hours, the shower contained about 25 meteors that were as bright as Jupiter and Venus in the morning sky. Early analysis suggests that NASA's photos are the first-ever observed outburst of the September Perseids, which result from an unknown comet.

A meteor is a bright streak of light that appears briefly in the sky, occurring when a particle or chunk of metallic or stony matter called a meteoroid enters the earth's atmosphere from outer space. Air friction heats the meteoroid so that it glows and creates a shining trail of gases and melted meteoroid particles. The gases include vaporized meteoroid material and atmospheric gases that heat up when the meteoroid passes through the atmosphere. Most meteors are visible for about a second. Observers often call meteors shooting stars or falling stars because they look like stars falling from the sky. The brightest meteors -- those brighter than the planet Jupiter -- are called fireballs.

William Cooke, Meteoroid Environments Office, NASA's Marshall Space Flight Center, reports from single station all-sky video observations a significant outburst of bright meteors on September 9 between 1:20 am and 5:30 am Central Daylight Time. In total, some 25 meteors of apparent magnitude greater than -2 were detected from a single radiant during this four hour interval. This is an apparent rate of such events exceeding the Perseid peak, suggestive of ZHRs ~100. An approximate apparent radiant is found to be at alpha = +50 and delta = +43. The timing and radiant are consistent with an outburst from the September Perseid meteor shower.