Grow Text SizeShrink Text Size
A STORRM is Coming
For the past two years, NASA engineers and contractors have been working on sensor technologies that would make it easier for space vehicles to dock to the International Space Station. 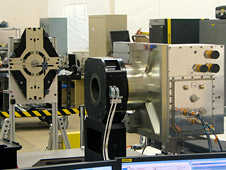 Five retro-reflectors, the first element of the STORRM test to go into space, will be attached to the International Space Station during the STS-131 space shuttle mission. The reflectors will be placed on the docking door of the space station in a precise pattern, as demonstrated in this lab test.
Credit: NASA 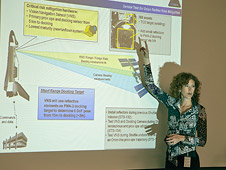 Audra Bullock, reflective elements lead for STORRM at NASA Langley, explains where the retro-reflectors will be placed on the outside of the ISS docking door.
Credit: NASA/Sean Smith 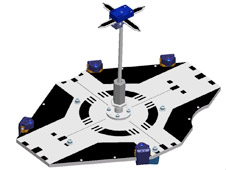 A prototype system using these technologies, consisting of the Visual Navigation System, or VNS, and a docking camera, will advance the capability necessary for automated rendezvous and docking. Developed by the Orion Project Office at NASA's Johnson Space Center, the system will be tested on STS-134, scheduled for this July as part of Sensor Test for Orion RelNav Risk Mitigation (STORRM) Development Test Objective (DTO).

The VNS is an eye-safe flash lidar system that provides an image of the target, in this case the space station -- along with range and bearing data to precise accuracies, explained Audra Bullock, the reflective elements lead at NASA Langley Research Center in Hampton, Va. NASA Langley is responsible for the integration of the VNS as well as the development of the avionics and reflective elements. The system also includes a new docking camera that is designed to provide high resolution, color images.

The importance of the demonstration on STS-134, explained Bullock, is that it will show that the VNS and docking camera can provide greater image resolution and provide more accurate data than the current system.

"The new vision navigation system that is being tested would make it easier for the astronauts during docking operations and give them more information earlier on about where they are in proximity to the space station, on the order of centimeters," Bullock said.

The first piece of hardware, five retro-reflectors, will go up on STS-131 scheduled for April 5. On flight day three, an astronaut inside the station will secure the five reflectors' clamps on the station's axial docking target.

The Visual Navigation System operates very much like a stop sign reflecting headlights. The specialized retro-reflectors -- which are made from material similar to that used on stop signs -- bounce light back with minimal scattering. The lidar targets the retro-reflectors to accurately calculate the range and line-of-sight angle measurements that the system then provides to the relative navigation software.

On STS-134, the prototype system will be demonstrated during docking, undocking and re-rendezvous operations. Data will be collected and the crew members will be able to monitor the data through a STORRM Software Application on their computer. In addition, screen snapshots of the data will be sent to Mission Control by slow scan video for the STORRM team to evaluate the data real time.

Though the reflector hardware may look simple, a lot was involved in creating this technology and there were a lot of factors to consider.

"We had to consider numerous constraints," said Byron Meadows, laser systems engineer at Langley. "These reflectors are going to be attached to the station in space, and you can't just drill, glue or use Velcro to get them to stay put."

For the reflectors, six different materials were tested before engineers decided on using the 3M reflective material based on performance.

Other considerations had to be taken in account, such as how the current navigation sensor, which is also a laser-based sensor, might respond to the new reflectors being tested.

To quell that concern, Langley engineers' design included a special filter installed in front of the reflective material that would prevent the current navigation sensor from detecting them.

Because there are only a few shuttle flights left, the team of contractors and engineers from NASA Langley and Johnson worked nights, weekends and holidays to prepare the VNS, software, avionics and reflectors in time to be tested on the space shuttle flights.

Under direction of the Orion Project Office, teams from NASA Langley, NASA Johnson, and industry partners Lockheed Martin and Ball Aerospace worked together in a short time to develop and test the prototype to support the STORRM DTO. Engineers at Langley are responsible for engineering management, design and build of the avionics, DTO computer hardware and reflective elements. They are also responsible for the integration, testing and certification of these components. NASA Johnson is responsible for program management, technology evaluation, flight test objectives, operational concepts, contract management and data post-processing. Industry partners Lockheed Martin Space Systems and Ball Aerospace Technology Corporation are responsible for the design, build and testing of the VNS and docking camera.