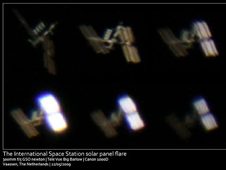 Sunlight glints from the space station's solar arrays on May 22, 2009.
> Launch movie
Credit: Quintus Oostendorp of Vaassen, the Netherlands.
If you've never seen a spaceship with your own eyes, now's your chance.

The International Space Station (ISS) has recently started a remarkable series of flybys over the United States. Beginning the first weekend of July, the station has been appearing once, twice, and sometimes three times a day successively. No matter where you live, you should have at least a few opportunities to see the biggest spaceship ever built.

The ISS has been under construction for nearly 11 years, and it has grown very large and very bright. The station is now more than 350 ft wide (wider than a football field), has 12,600 cubic feet of labs and living quarters, and on Earth would weigh about 670,000 lb. Sunlight illuminating the massive outpost makes it shine fifteen times brighter than Sirius, the brightest star in the sky.

Sometimes it is even brighter than that. Sunlight glinting from the station's flat surfaces (mainly solar arrays) produce dazzling flares as much as six hundred times brighter than Sirius. For astronomers: On the scale of visual magnitudes, space station flares register -8.

"The station flared spectacularly on May 22 when it passed over my backyard observatory in the Netherlands," reports amateur astronomer Quintus Oostendorp. "I knew the ISS was coming, so I had my telescope ready and I was able see exactly what happened."

At present, the flares are unpredictable. No one knows when they will happen or exactly how bright they will be. Any given flyby could be interrupted by one—and that's what makes the watch so much fun.

The marathon of space station flybys won't stop until mid-to-late July (depending on your location). That gives space shuttle Endeavour, currently scheduled to launch on July 11, time to reach the space station and join the show. As the shuttle approaches station for docking, many observers will witness a memorable double flyby—Endeavour and the ISS sailing side by side across the starry night sky.

Endeavour is on yet another space station construction mission. This time it will deliver a "space porch" to be added to Japan's Kibo science laboratory module. The porch is not a place where astronauts can sit, relax and watch the stars drift by (although that is not a bad idea); it is a science platform. When an experiment needs to be exposed to the hard vacuum or energetic radiation of space, it can placed outside on the porch to take advantage of the space station's unique research environment. The official name of the porch is the Kibo Japanese Experiment Module Exposed Facility and it will add its own small contribution to the station's reflected luminosity in the night sky.

What now? Check for flyby times, ready your telescope (optional), and let the sightings begin. Author: Tony Phillips
Credit: Science@NASA
› Back To Top