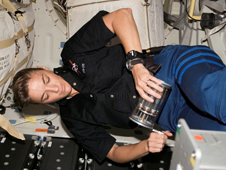 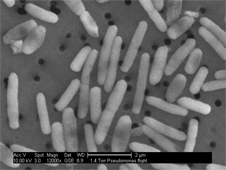 Click image for full-resolution.
A scanning electron micrograph image of Pseudomonas aeruginosa cultured onboard shuttle mission STS-115, as part of the Microbe experiment at a magnification of 12,000X.
Image Copyright: Mayra Nelman-Gonzalez 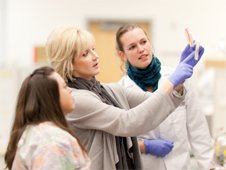 Click image for full-resolution.
Left to right: Jennifer Barrila, Cheryl Nickerson and the paper's lead author, Aurélie Crabbé
Image credit: Arizona State University
Astronaut Fred Haise was a long way from home when he became sick with an infection caused by an opportunistic pathogen known as Pseudomonas aeruginosa while aboard the Apollo 13 mission to the moon in 1970.

Now, more than four decades later, this same bacterium is central to an important discovery by scientists using human spaceflight research to unlock the mysteries of how disease-causing agents work and can be controlled.

Recent space research is giving scientists a better understanding of how infectious disease occurs in space and could someday improve astronaut health and provide novel treatments for people on Earth.

"With our space-based research efforts, including the International Space Station, we are not only continuing our human presence in space, but we are engaged in science that can make a real difference in people's lives here on Earth," said NASA Administrator Charles Bolden. "NASA's leadership in human spaceflight allows us to conduct innovative and ground-breaking science that reveals the unknown an unlocks the mysteries of how disease-causing agents work."

Scientists studying the bacterium, Pseudomonas aeruginosa, that flew aboard the shuttle en route to the International Space Station, hope to unlock the mysteries of how disease-causing agents work. They believe the research can lead to advanced vaccines and therapies to better fight infections. The findings are based on flight experiments with microbial pathogens on NASA shuttle missions to the International Space Station and appear in a recent edition of the journal Applied and Environmental Microbiology.

"For the first time, we're able to see that two very different species of bacteria - Salmonella and Pseudomonas - share the same basic regulating mechanism, or master control switch, that micro-manages many of the microbes' responses to the spaceflight environment," said Cheryl Nickerson, associate professor at the Center for Infectious Diseases and Vaccinology, the Biodesign Institute at Arizona State University (ASU) in Tempe. "We have shown that spaceflight affects common regulators in both bacteria that invariably cause disease in healthy individuals [Salmonella] and those that cause disease only in people with compromised immune systems [Pseudomonas]."

By studying the global gene expression patterns in bacterial pathogens like Pseudomonas and Salmonella, Nickerson's team learned more about how they react to reduced gravity.

Healthy people can have Pseudomonas aeruginosa live in their bodies without getting sick, but it poses a serious threat to people with compromised immune systems. This bacterium is the leading cause of death for those suffering from cystic fibrosis and is a serious risk to burn victims. However, a high enough dosage of Salmonella typhimurium always makes even healthy individuals sick.

During the initial study in 2006, two bacterial pathogens, Salmonella typhimurium and Pseudomonas aeruginosa, and one fungal pathogen, Candida albicans, were launched to the station aboard space shuttle Atlantis' STS-115 mission, in a project nick-named MICROBE. They were allowed to grow in appropriately contained vessels for several days. Nickerson's team was the first to evaluate global gene and protein expression (how the bacteria react at the molecular level) and changes in how likely microbes are to cause an infection in response to reduced gravity.

"We discovered that aspects of the environment that microbes encountered during spaceflight appeared to mimic key conditions that pathogens normally encounter in our bodies during the natural course of infection, particularly in the respiratory system, gastrointestinal system and urogenital tract," Nickerson said.

"This means that in addition to safeguarding future space travelers, such research may aid the quest for better therapeutics against pathogens here on Earth," said Benjamin Neumann director of NASA's Advanced Capabilities Division at NASA Headquarters, Washington.

The initial study and follow-on Immune Space Tissue Loss experiment on space shuttle Discovery's STS-131 mission show that spaceflight creates a low fluid shear environment, where liquids exert little force as they flow over the surface of cells. The low fluid shear environment of spaceflight affects the molecular genetic regulators that can make microbes more infectious. These same regulators might function in a similar way to regulate microbial virulence during the course of infection in the human body.

"We have now shown that spaceflight conditions modified molecular pathways that are known to be involved in the virulence of Pseudomonas aeruginosa," said Aurélie Crabbé, a researcher in Dr. Nickerson's lab at ASU and the lead author of the paper. "Future work will establish whether Pseudomonas also exhibits increased virulence following spaceflight as did Salmonella."

For an abstract of the journal article on this research, visit:


http://www.ncbi.nlm.nih.gov/pubmed/21169425
To read the NASA news release about this research, visit: