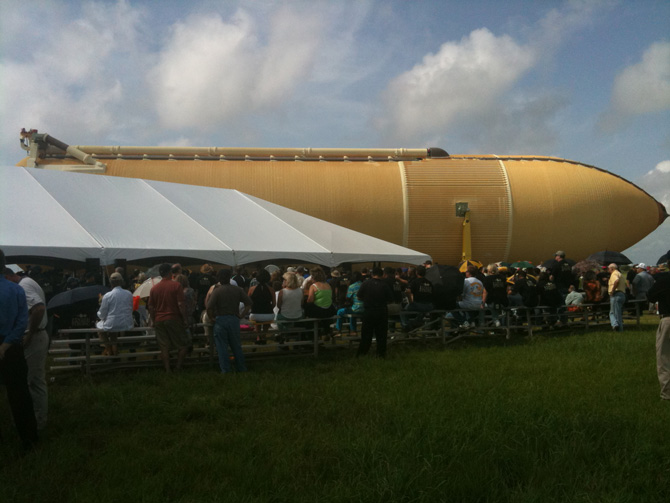 The last external tank scheduled to fly on a shuttle mission was completed on June 25 by Lockheed Martin workers at Michoud. The tank, designated ET-138, will travel on a wheeled transporter one mile to the Michoud barge dock. It will be accompanied by the Storyville Stompers, a traditional area brass band, and hundreds of handkerchief-waving employees in typical New Orleans fashion and spirit during the ceremony. ET-138 will then travel on a 900-mile sea journey to NASA's Kennedy Space Center in Florida, where it will support shuttle Endeavour's STS-134 launch.

The external tank, the "gas tank" for the orbiter, holds the propellants used by the space shuttle main engines. It also is the "backbone" of the shuttle during launch, providing structural support for attachment with the solid rocket boosters and orbiter. It is the only component of the space shuttle that is not reused. Approximately 8.5 minutes into the flight, with its propellant used, the tank is jettisoned into the ocean. 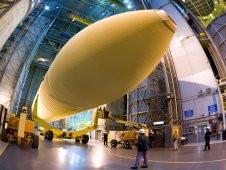 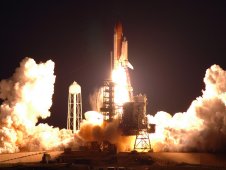 External tank ET-138 (top) will help launch Space shuttle Endeavour (bottom) into space on its last mission later this year. (Image credit: NASA) Taller than a 15-story building and more than 27 feet in diameter, the external tank absorbs the 7.8 million pounds of thrust of the three space shuttle main engines and solid rocket boosters during a space shuttle launch. It feeds 145,000 gallons of liquid oxygen and 390,000 gallons of liquid hydrogen to the main engines.

The three main components of the external tank include the liquid oxygen tank, liquid hydrogen tank and the collar-like intertank, which connects the two propellant tanks. The intertank houses instrumentation and processing equipment and provides the attachment structure for the solid rocket boosters.

When ET-138 arrives at Kennedy, processing will begin to mate it with shuttle Endeavour and solid rocket boosters for the STS-134 mission, scheduled to launch no earlier than mid-November. The mission will deliver the Express Logistics Carrier 3 and the Alpha Magnetic Spectrometer to the International Space Station. It will be the 36th shuttle mission to the space station and the 134th and final scheduled shuttle flight.

Work will be completed on one additional external tank, ET-122, which was at Michoud during Hurricane Katrina in August 2005 and damaged by falling debris. It is being restored to flight configuration and is scheduled for delivery to Kennedy in late September to serve as the “Launch on Need” tank, if needed, for STS-134.

› Ceremony Photos→
› About the External Tanks
› About STS-134