Not many artists are privileged to see their work fly in space. Pestana, a NASA research pilot at NASA's Dryden Flight Research Center, located on Edwards Air Force Base, Calif. designed the mission patches for nine space shuttle crews, including the STS-123 Shuttle Endeavour mission to the International Space Station.

"Most crews have some idea what they want, and ask for help in assembling their ideas," Pestana says.

"Some crews have no particular ideas and I get to start from scratch. Some also want specific colors or symbolism, some of which have hidden meanings. An example is a field of stars numbering the total number of children among the crewmembers. 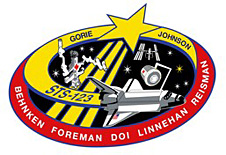 "I usually draft three or four designs," Pestana continues. "After further deliberation it narrows down to the final. In the end it's both fun and an honor to be asked to help, and then to see my art launched into orbit!"

In addition to mission patches, Pestana has designed other items, such as the emblem for the NASA Johnson Space Center's Flight Crew Operations Directorate, and NASA Dryden's 60th anniversary logo.

Pestana won first place in the space category of Aviation Week and Space Technology magazine's annual aviation art competition last December. His "The Quest for Mach 10" painting depicted NASA's X-43 aircraft, chased by an F/A-18, after launch on its record-setting hypersonic flight to Mach 9.8 in November 2004.

A research pilot and project manager at NASA Dryden for the past nine years, Pestana pilots NASA Dryden's B200 King Air, the T-34C and the remotely piloted Ikhana aircraft. He also serves as co-pilot and flight-test engineer on the center's F/A-18 Hornet aircraft. Gray Creech
NASA Dryden Flight Research Center
› Back To Top