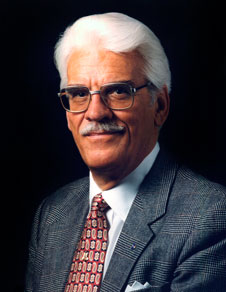 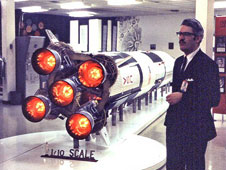 Jesco von Puttkamer stands beside a model of the Saturn V rocket in this image taken in 1969.
Image Credit: NASA
Jesco von Puttkamer, who began his NASA career in 1962, when he worked on Wernher von Braun's rocket team as an engineer at the agency's Marshall Space Flight Center in Huntsville, Ala., during the Apollo Program, has died, following a brief illness. He was 79.

Von Puttkamer most recently worked in the International Space Station Program at NASA Headquarters in Washington as a technical manager. For more than a decade, he authored the ISS Daily Report, which chronicled the lives and activities of the crew members living aboard the International Space Station. He also was instrumental in advancing U.S. and Russian cooperation in human spaceflight. His personal relationships in Russia and the U.S. allowed him to bring both communities together in dialogue and activities. The space station program still is benefiting from his work.

Von Puttkamer arranged the translation from Russian to English of the Boris Chertok series "Rockets and People" that chronicled the history of the Russian space program. He also was instrumental in Russian exhibitions of U.S. accomplishments in space, including museum series on von Braun, Apollo 11 and the Hubble Space Telescope.

"Jesco was an institution at NASA," said William Gerstenmaier, associate administrator for Human Exploration and Operations at NASA Headquarters in Washington. "His time here spanned almost the entire breadth of the agency's human spaceflight programs. He was a direct link from von Braun's efforts to get people off the ground to the International Space Station and 12 years of continuous human presence. We lost an outspoken advocate for NASA's efforts to explore farther than we ever have gone before."

Von Puttkamer received numerous awards during his 50 years at NASA. Among those honors was NASA's prestigious Exceptional Service Medal in 2004. In 2007, he received a NASA Honor Award for successful initiatives of advancing American-Russian cooperation in spaceflight. In December 2008, the U.S.-wide German-American Heritage Foundation in Philadelphia honored von Puttkamer with its “Distinguished German-American of the Year” award. For this honor, he received congratulatory letters from President George W. Bush, then-NASA Administrator Michael Griffin and the Governors of the states of Pennsylvania and Virginia.

He is the author of more than a dozen books on spaceflight. His novelette, "The Sleeping God," was published in the anthology "Star Trek: The New Voyages 2." His diary/book on the first lunar landing by Apollo 11 was published in Beijing in 1982 in a Chinese translation. A revised edition of this book was published for the 40th anniversary of the Apollo 11 mission in July 2009.

Von Puttkamer lived in Huntsville beginning in 1962 when he worked at Marshall with von Braun in the aeroballistics division. He came to NASA at von Braun's personal invitation. In 1974, von Puttkamer transferred to NASA Headquarters.

Von Puttkamer is survived by his wife, Ursula.

Below is a segment from "This Week @ NASA" from March 23, 2012 in which von Puttkamer was featured.