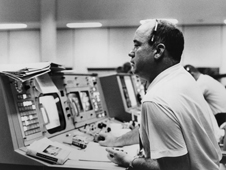 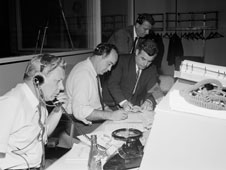 Shown in the Mission Control Center during the recovery operations of the Gemini-Titan 4 mission are, from left to right, Bob Hart, Paul Haney, Al Alibrando and Terry White. Image Credit: NASA. Click for larger image.
Paul Haney, a longtime NASA public affairs officer and voice of the Gemini and Apollo programs, passed away Thursday in New Mexico at the age of 80.

A native of Akron, Ohio, Haney was a news reporter for the Associated Press, the Erie Times and the Washington Evening Star before joining NASA at the agency's inception in 1958.

Haney pioneered a system of reporting NASA events as they happened, providing real-time information to the public and news media covering NASA's space missions. He delivered launch commentary on Gemini 3 and mission commentary during the early Apollo missions. He became chief of public affairs at the Manned Spacecraft Center, later renamed the Johnson Space Center in Houston and worked in the Mission Control Center during Gemini and Apollo flights. He left NASA in 1969.

"Paul was a true professional and one of the best in the business," said former NASA colleague Jack King, the voice of Apollo 11 launch. "He was a tremendous writer, an innovator and one of the good guys. We'll miss him."