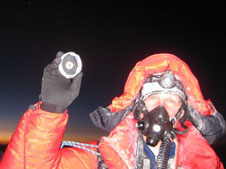 Parazynski holds aloft a lunar sample as he stands on the summit of Mt. Everest.
Image Credit: onorbit.com. 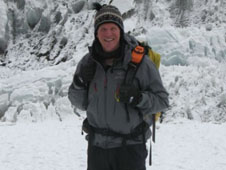 The lunar sample, numbered 10085,134, was retrieved about 15-20 feet north of the Lunar Module Eagle which landed in the southern Sea of Tranquility. NASA loaned the sample to Parazynski and his climbing team. This sample weighs 0.052 of a gram and is encapsulated in a clear acrylic button about 0.75 inches in diameter. The larger sample from which it hails weighed 569 grams.

Last year Parazynski made his first effort to climb Everest, but was forced to turn back at 24,500 feet into the ascent because of a serious back injury.

Parazynski's love of climbing started at a young age, when he read books about explorers fighting their way to Mt. Everest's peak. Some of the mountains he has already conquered include Cerro Aconcagua, which at 22,841 feet above sea level it is the tallest mountain in the world outside of Asia; and 53 of Colorado’s mountains, which peak at more than 14,000 feet.

Parazynski, a physician, is a veteran of five space shuttle flights and seven spacewalks. He flew on shuttle missions STS-66 in 1994, STS-86 in 1997, STS-95 in 1998, STS-100 in 2001 and STS-120 in 2007. He has logged more than 1,381 hours in space, including more than 47 hours spacewalking. Parazynski flew on missions that traveled to the Russian Mir Space Station and the International Space Station. He was selected as an astronaut in March 1992.

Check out Parazynski's messages and photographs from his Everest adventure.